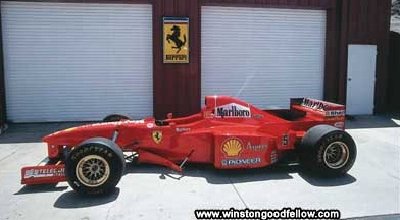 The Ferrari F310B was a 10-cylinder, 7-speed automatic with improved aerodynamics.

A revolution was taking shape at Ferrari in the second half of 1995.

After studying several engine types, including V-8s and V-12s, Maranello announced it would use a V-10 in F1 for 1996. It marked the first time the Scuderia had tried a 10-cylinder configuration.

And rumors swirled that Ferrari was actively courting two-time world champion Michael Schumacher, widely recognized as the fastest driver in F1. Schumacher was at the time driving for Benetton-Renault, and two weeks after he won at the Hockenheimring in his German homeland, it was announced he would indeed be with Ferrari in ’96. He was signed to a two-year contract worth $24 million.

Ferrari’s new F1 car for 1996 was the F310. Among the benefits of its 10-cylinder engine was a compact size that allowed much-improved aerodynamics. The 2998cc unit initially produced 700 horsepower, a figure bumped to 725 later in the season.

As for Schumacher, his importance was obvious to longtime F1 reporter Andrew Frankl.

“Five aspects seem to stand out in an analysis of his talent,” Frankl reported in 1996 in FORZA, a magazine devoted to Ferrari. “They are: his never-ending commitment to the testing process; his technical ability; his confidence in his own driving ability; his incredible attention to detail, which emanates from a quest for precision and perfection ... And last -- and not wholly unimportant, his will to win.”

Schumacher’s teammate was also new to Ferrari. Irishman Eddie Irvine had come over from the Jordan team, and he scored the F310’s first points with a third-place finish in the season’s inaugural race at Australia. Schumacher followed with a third in the next race, at Brazil. He retired in Argentina, then went on a tear.

In the season’s final 13 contests, Schumacher scored three victories, three seconds, and a third. He finished third in a driver’s championship won by Williams-Renault’s Damon Hill. Ferrari was a distant runner-up to Williams-Renault in constructors points.

Ferrari upped the ante in 1997 with the Ferrari F310B. The aerodynamics were revised, the V-10’s output increased to 750 horsepower, the transmission was upgraded, and a new differential was used in an attempt to solve reliability issues. Ferrari was again second to Williams-Renault in the constructors championship, but the points margin was slimmer than in ’96. In the driver’s chase, Schumacher went into the season’s final race, at Jerez in Spain, leading Williams-Renault’s Jacques Villeneuve by one point, 78-77.

The race was the setting for one of F1’s most controversial moments. On lap 48, Villeneuve’s blue-and-white Williams pulled alongside Schumacher’s red Ferrari in a corner, and appeared about to pass. Suddenly, Schumacher veered, and his right front tire made contact with Villeneuve’s sidepod. Schumacher ended up in a gravel trap, but his rival was able to continue, and finished in third place.

Villeneuve ended the season with 81 points. Schumacher accumulated 78, but FIA officials judged his Jerez move an intentional bid to take Villeneuve out, and disqualified the Ferrari driver in the championship standings.