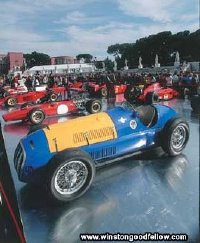 After World War II, Formula 1 took longer to gel than sports-car competition. It was called Grand Prix racing prior to the war, when it was a technological tour de force and teams benefited from government backing as part of the political propaganda machine. After the war, financing for proper engineering, materials, fuel, and even the venues was in short supply.

When Ferrari entered the fray in 1948, he used his 125 S sports-racer as the starting point for the first Ferrari Grand Prix racer, the 125 F1. Like the sports-racer, it used Ferrari’s compact, high-revving 1497cc V-12. But chief engineer Gioachino Colombo exploited F1 rules and followed the era’s typical practice of supercharging. This boosted horsepower from 118 in the 125 S to 230. Both used a five-speed gearbox.

Known originally as the 125 Grand Prix, this was the first single-seater to wear the Ferrari badge. Its torpedo-shaped body was a pleasing design, with a large eggcrate grille, long nose, exposed wheels, and proper proportions. The frame was of steel tubes with struts and crossmembers. The front suspension followed the lead of the 125 S, with double wishbones, a transverse leaf spring, and shock absorbers. In the rear were longitudinal struts, a torsion bar, and shock absorbers.

The Ferrari 125 F1 first appeared in September at the race in Turin. Three started, and the one driven by Raymond Sommer finished third overall. A month later, Giuseppe “Nino” Farina drove a Ferrari 125 F1 to Ferrari’s first Grand Prix victory, at Garda, in Italy.

The winner at Turin, and the cars to beat during this period in F1, were the Type 158s from Alfa Romeo. Four of the sophisticated monopostos had survived the war, and with a bit of refurbishment, they were dominating the competition. Ironically, it was Enzo himself who had helped build the foundation for this dominance in his prewar stint at the helm of Alfa’s racing effort.

For the 1949 Italian Grand Prix at Monza, Ferrari introduced a new 125. This car had a longer chassis with similar underpinnings, but the big news was the engine. It now had double overhead cams and a two-stage Rootes supercharger, boosting horsepower to 280.

Formula 1 as a description for Grand Prix racing came into use in 1947, with the establishment of the sport’s governing body, the Federation Internationale de l'Automobile (FIA), headquartered in Paris. In 1950, the FIA established F1’s World Championship of Drivers, based on points per race. The FIA would not designate an F1 constructors championship until 1958, so in these early years, the manufacturers looked to the drivers for reflected glory.

Late in 1950, Ferrari shortened the 125’s chassis and modified the rear suspension by using a de Dion tube and leaf springs. The new four-speed gearbox became integral with the final drive. That made the car extremely competitive, but it still wasn’t enough to unseat Alfa Romeo. Alfa won all six Grand Prix races it entered and its driver Nino Farina, who had left Ferrari after the 1949 season, was F1’s first world champion.