Other Cars With Ferrari Engines

Browse the article Other Cars With Ferrari Engines 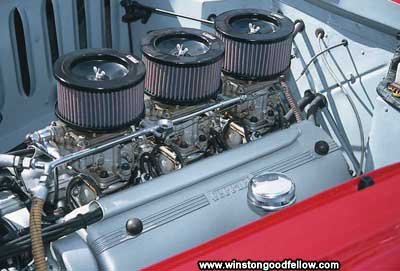 Over the years, the magic of a Ferrari engine has appeared under the hood of a few cars that were not Ferraris. This article details four models -- the ASA 1000 GT, Fiat Dino, Lancia Stratos, and Lancia Thema -- that benefited from Ferrari's world-class engineering.

The first one we'll discuss is the ASA 1000 GT, which caused quite a sensation when it debuted. Continue to the next page to learn more.

In December 1959, Ferrari tantalized the automotive world by displaying an 850cc four-cylinder engine. Using heads quite similar to those found on his V-12s, Ferrari quoted the type 854’s horsepower between 64 and 82, depending upon state of tune.

Following a successful series of bench tests, one engine was installed in a slightly modified Fiat 1200. Subsequently dubbed the Ferrarina (little Ferrari) by the press, rumors began flying that Ferrari was going to produce an inexpensive car.

The project met stiff resistance inside Ferrari. Former sales manager Girolamo Gardini recalled the Ferrarina being a nuisance, a product out of character with the company’s elite image. Yet, with Enzo Ferrari firmly behind it, it would not die.

Ferrari hit pay dirt in 1961 when he sold the rights to produce and construct the car and engine to the owners of a large chemical-manufacturing concern in Milan. Prominent Ferrari client Oronzio De Nora and his son Niccolo called the company ASA (Autoconstruzioni S.A.), and the production prototype of the car was a far cry from the dowdy Ferrarina proposal.

It made its debut at 1961’s Turin show, where it caused a sensation. Motor called it an “excellent example of elegance combined with compactness. Road & Track said, “The [show’s] only headliner was to be found on the Bertone stand. This was the baby Ferrari . . . its clean shape proclaiming it to be the newest style of businessman’s express.”

The production version of the ASA 1000 GT went on sale in 1963. Under the clean Bertone coachwork was a tubular chassis, independent front suspension, and the Ferrari-designed 97-horsepower 1032cc four-cylinder engine.

The press loved the car. In a January 1963 Sports Car Graphic test, Bernard Cahier saw a top speed of 112 mph and found the “brilliant little car” had “superb road handling.”

Despite refinement and impressive performance that belied its 1.0-liter capacity, the ASA 1000 GT languished in the marketplace. It cost approximately 40 percent more in Italy than Alfa’s larger-engined Giulia Sprint, and ASA simply couldn’t translate good reviews into good revenue. Variations, including a beautiful 1000 GT Spider, didn’t change the company’s fortunes, and ASA quietly closed its doors in 1966.

In late 1964, Enzo Ferrari approached Fiat patriarch Gianni Agnelli about working together on a new engine. Behind the collaboration was a rule change in Formula 2 racing for 1967: To qualify an engine for the series, it had to be used in an automobile with a production run of at least 500 units. That sort of volume would be impossible for Ferrari to accomplish alone.

“A visit by [Fiat managing director Gaudenzio] Bono to Maranello made the contracts official and marked the start of full collaboration,” Fiat chief engineer Dante Giacosa recalled in his autobiography, Forty Years of Design with Fiat. “[Vittorio] Valletta, Giovanni Agnelli and Bono thought it a good idea to accept Ferrari’s proposal and made arrangements for the design of a sports car with the Dino engine.”

And so was born Fiat’s most prestigious model since the 8V of the 1950s. The first Fiat Dino, a spider designed by Pininfarina, broke cover at Turin in 1966. Several months later, at Geneva, Bertone presented a coupe. Both cars used a front-mounted Ferrari-designed 1987cc V-6 that produced 160 horsepower at 7200 rpm.

The Dino’s pressed steel chassis had a shorter wheelbase on the spider, an independent suspension up front, and a live axle in the rear. The gearbox was a five-speed, and brakes were discs. Top speed was listed at 130 mph.

Henry Manney was one of the few journalists to test the exclusive model; he drove the Spider. “The Dino is a real sports car,” he wrote in Road & Track, “with lots of rasp from its ... V-6. [It also has] a lovely 5-speed gearbox, supreme comfort for the driver, sleek Italian lines, and instruments for every contingency. Under way [it] felt ... Ferrari-like in spite of the Fiat construction ... ”

An updated version of the car was introduced in 1969. The V-6 now displaced 2418cc and produced 180 horsepower. The five-speed ZF gearbox was new, and an independent suspension replaced the live axle in the rear. Assembly of the cars also moved from Turin to the Ferrari works in Maranello.

Production continued into January 1973, the popular Fiat Dino vastly exceeding the original 500-unit requirement for F2. In total, 7,651 Fiat Dinos were made.

Fiat’s Dino coupe and spider weren’t the only cars to use Ferrari’s V-6. Lancia’s Stratos was a completely different animal that broke cover at 1970’s Turin Motor Show as a Bertone concept car with a centrally mounted 1.6-liter inline-four.

Surprisingly, the only Lancia person who expressed interest at its raucous debut was the company’s competition manager, Cesare Florio. That spark turned into a flame over the next 12 months when Nuccio Bertone drove the prototype to Lancia Stratos. Shortly after he parked at the company’s factory, it quickly became apparent Lancia was interested in a small-series production, using it as the basis for a rallye car.

The result was the Stratos HF. Introduced at the 1971 Turin show, it was an incredibly compact car with a striking angular body and an overall length some 19 inches shorter than a 246 Dino. Supplementing the stiff steel monocoque center section were tubular steel frames front and rear. Suspension had coil springs and double wishbones up front, and a wishbone and radius arm in the rear. Power came from the centrally mounted 2.4-liter Ferrari V-6.

Incredibly, the Stratos was racing one year after the Turin debut, though it didn’t finish either of the first two rallyes it started. Two former Ferrari personnel, engineer Gianpaolo Dallara and driver Mike Parkes were hired to right the situation, and the following year, the Stratos scored two victories. In 1974, it helped Lancia win the World Rallye Championship, a crown it won again in 1975 and 1976.

Production of roadgoing versions began in late 1974. These were among the quickest sports cars of the day, with a 140-mph top speed and capable of 0-60 mph in 6.8 seconds. But they demanded a patient, skilled driver.

“What’s it like to drive a car like the Stratos?” asked Autocar in a 1975 road test. “The simple answer is that it is exhilaration and frustration at the same time. Exhilarating because the car responds so accurately to whatever input the driver gives, be that acceleration, braking or cornering. Frustrating in that the limits of adhesion are so high that only on a closed course can a newcomer ... even begin to explore the outer limits of roadholding.”

Where Lancia’s Stratos was a raw sports car born from rallying, its Lancia Thema 8.32 was a luxurious sedan. About all they had in common was that each had a Ferrari engine.

The Lancia Thema appeared in 1984, the result of a desire for a flagship sedan by four European marques: Lancia, its parent company Fiat, Alfa Romeo, and Saab. They pooled their resources to make a new platform that could be shared and adapted by each company.

The result was the Fiat Croma, Alfa 164, Saab 9000, and the Lancia Thema. The Lancia Thema marked Lancia’s return to a more-exclusive market segment. As such, it had proper luxury amenities such as a full leather interior, heated seats, sunroof, and air conditioning. Power initially came from a variety of naturally aspir-ated, turbo, and diesel Lancia-speced engines.

With two oil crises and the economic and political strife of the late 1970s and early 1980s receding from Europe’s collective memory, speed and ever-greater luxury came once again to the fore. Lancia’s response was the Lancia Thema 8.32. Introduced in 1986, the model name referred to its use of the 2926cc V-8 (8-cylinders, 32 valves) from the Ferrari’s midengine 308 quattrovalvole and Mondial.

Because the Lancia Thema was front-wheel drive, the transversely mounted V-8 slipped nicely into the sedan’s engine compartment. The engine used a two-plane crank for better and smoother low speed performance. Though horsepower decreased to 215, from 240 in the Ferraris, torque remained 209 pound-feet at 4500 rpm. (Later “Series II” Themas had catalytic converters that dropped power output 10 hp.) Other mechanical changes included a beefed-up suspension with electronically controlled dampers, improved brakes, and a new ZF steering system.

The Lancia Thema 8.32 was distinguished from other Themas only by badging, a different grille, alloy wheels, and a trunklid spoiler that raised automatically when speed exceeded 80 mph. The interior had the finest woods on the dashboard, and finer leather than the standard models.