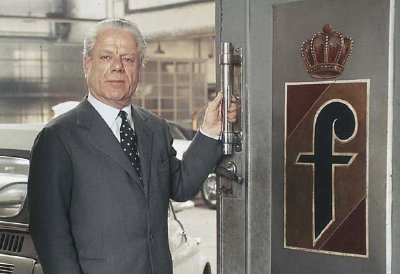 Role in Ferrari History: The design dynasty that gave Ferrari its enduring style

Born Battista Farina (1893-1966), his nickname “Pinin” was local Turinese dialect for smallest of the family. That, however, did nothing to diminish the man’s towering influence on the automotive world.

Pinin’s career started in his teenage years at his brother Giovanni’s coachbuilding firm, Stablimenti Industriali Farina S.A. Pinin’s innate design abilities, social graces, and managerial skills saw him rapidly ascend, and by the 1920s he was visiting Ford in America, where he turned down a job offer. That trip taught Pinin much about mass-production techniques.

He left Stablimenti Farina in 1930 to start his own company, Carrozzeria Pinin Farina (the Pininfarina name officially became one word in 1961). The firm grew rapidly through the 1930s, and then especially during the immediate postwar years, with clients as diverse as Cadillac, Alfa Romeo, and Bentley. Pinin is widely regarded as the world’s master of elegant automotive shapes, forms, and proportions, as exemplified by his revolutionary berlinetta of 1947, the Cisitalia 202.

That level of design caught the eye of Enzo Ferrari, and in 1952, Carrozzeria Pinin Farina began working with Ferrari. From the start, Pinin put his son Sergio (1926- ) in charge of the Ferrari account. Then in his mid 20s, young Sergio had his hands full with a truculent Enzo Ferrari, but won over the great man with his engineering and design acumen, and his good nature, tenacity, and honesty.

Some of the world’s most-beautiful and highest-performing automobiles resulted from the relationship between Ferrari and Sergio Pininfarina. But Sergio’s role entailed more than handling the Ferrari account. Throughout the 1950s, he became more and more involved in the running of Pininfarina while maintaining a hand in its styling direction. When his father died 1966, Sergio was named the company’s president.

In the second half of the 1970s, he was president of the Turin Industrialists’ Union, and played an integral role in soothing the city’s tumultuous business climate during the period. A worldwide ambassador for Italy, he was also elected to Europe’s Parliament, among numerous other honors.