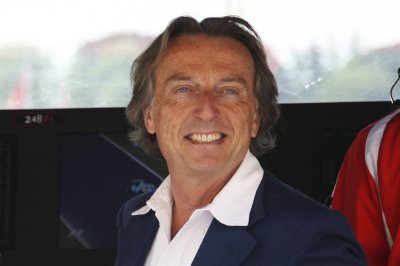 If Webster’s Dictionary ever needs a new definition for the word “charisma,” its editors might simply have the entry read “The Marquis Luca Cordero di Montezemolo.” Born in Bologna in 1947, Montezemolo studied law at the University of Rome, then continued at New York’s Columbia University, where he specialized in International Commercial Law.

He briefly worked in a Rome-based law firm before being hired by Fiat in 1973. He quickly became Enzo Ferrari’s assistant, and in 1975 was named manager of the Formula 1 team, bringing Ferrari its first driver’s and constructors championships since 1964. Three more titles followed over the next two years.

In 1977, Montezemolo became the Fiat Group’s Senior Vice President of External Relations, a position he held until 1981. After managing Itedi, a Fiat subsidiary that published the widely read La Stampa newspaper. The maker of wines and spirits, Cinzano, was his next stop. He also managed Italy’s first entry in the America’s Cup, and was director of the country’s 1990 World Cup-winning soccer team.

Ferrari courted him in 1991 to become its CEO, and Montezemolo recognized what he was up against. As he recalled years later about the 348 model he had recently purchased, “I was utterly disappointed. This was the worst product Ferrari had developed for some time.”

No sooner had he arrived than product quality improved dramatically, the 348 becoming an outstanding car. Ferrari went from one winning product to another under Montezemolo, first with the 456 GT, then the F355, and the 550 Maranello. Montezemolo’s vision of product pushed boundaries, as the 360 Modena, F430, and the radical Enzo demonstrated.

He was equally active in Ferrari’s competition operations. Montezemolo orchestrated the signing of driver Michael Schumacher, and made certain the right team surrounded him. The result was 1999-2004’s unprecedented dominance of Formula 1.

His vision didn’t stop there. His “Formula Uomo” concept transformed the company and its working environment, making the Ferrari facility into a beautiful, ecologically smart “small town” devoted to constructing cars of the highest technology.

In 2004 he was appointed head of Italy’s powerful Confindustria business lobby. That same year he became Chairman of Fiat.