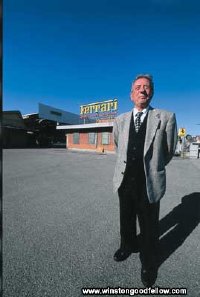 Sergio Scaglietti (1920- ) of Modena began his career in the automotive industry at age 13. His father had suddenly passed away, so Sergio’s older brother lied about Sergio’s age to get him a job at the carrozzeria that employed him. Sergio, who enjoyed working with his hands, became a quick study.

When Sergio was 17, his older brother and another employee formed their own coachbuilding company and took young Sergio with them. They set up shop in downtown Modena across the street from Enzo Ferrari’s Scuderia Ferrari, and in a short time they were repairing the Scuderia’s cars.

World War II interrupted further development of the relationship. In the years after the war, Ferrari was comfortable enough with Scaglietti’s maturing talent that he frequently brought him crashed cars for repair.

Then in the early 1950s, a gentleman racer from Bologna commissioned Sergio to rebody his damaged Touring Barchetta. “Enzo Ferrari saw this and said ‘That is not bad,’” Scaglietti remembered. “From this, he entrusted me with a new chassis.”

By 1954, Scaglietti was a sanctioned Ferrari coachbuilder who received a number of chassis directly from the factory for coachwork. He designed all his shapes “by the eyes alone,” he said, letting his own “good taste, understanding of aerodynamics, style, and function” dictate his designs.

Before long, the Ferraris emanating from the shop would be ranked among the most beautiful and memorable competition cars ever made. The honor roll included such top-flight sports-racing cars as the 500 Mondial and 500 TR and TRC, the classic pontoon-fender 250 Testa Rossa, the winning 290 MM, 315 and 335 S, and the immortal 250 GTO.

In the late 1950s, with Enzo Ferrari setting him up with the banker and cosigning the loan, Scaglietti greatly expanded his enterprise. He began building numerous street Ferraris to designs by Pinin Farina. His business prospered, and Scaglietti enjoyed the rewards and prosperity the expansion brought him.

In the late 1960s, however, with labor troubles a constant, Scaglietti leapt at the opportunity to join Ferrari in a sale of his business to Fiat. Scaglietti continued to manage the carrozzeria until his retirement in the mid 1980s. Ferrari’s 612 Scaglietti model, and the Carrozzeria Scaglietti customization program, were named after the humble artisan.