Browse the article How the Ferrari 599 GTB Fiorano Works 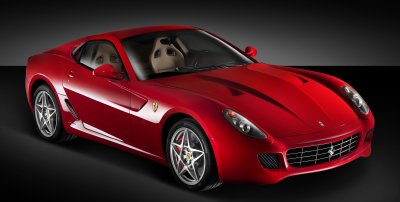 The technically advanced 612 Scaglietti implied Ferrari's next V-12 two-seater would be something very special, but few were prepared for the "shock and awe" of the Ferrari 599 GTB Fiorano.

Announced at Detroit in January 2006 and publicly unveiled the following month at Geneva, the Ferrari 599 GTB Fiorano possessed the soul of the classic Daytona, the heart of the Enzo, and state-of-the-art technology developed over 60 years of world-beating competition experience.

Here was not just a worthy replacement for the Ferrari 550/575 Maranello but the most powerful, sophisticated front V-12 GT in Ferrari's proud history. One of the most beautiful, too, according to most every critic. There was certainly no doubting the Ferrari 599 GTB Fiorano's intent. Fiorano, after all, is the home of Ferrari's test track, so this name is revered as much as Maranello or Modena by heritage-minded Ferraristi and the company itself. But the 599 could carry that symbolic freight. Even by Ferrari standards, this was an exceptional automobile. 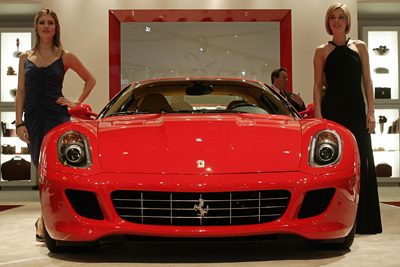 The Ferrari 599 GTB Fiorano was basically a cut-down 612 with the thrilling Enzo V-12 and aerodynamically efficient new Pininfarina bodywork designed under Frank Stephenson.

Despite appearances, the Ferrari 599 GTB Fiorano was quite a bit larger than the Maranello, measuring 183.7 inches long, 77.2 inches wide and 52.6 inches high on a 108.3-inch wheelbase. The long-hood/short-deck proportions were classic front-engine Ferrari, but graced by an artful new mix of curves and creases that belied the increased dimensions.

Interesting functional details abounded. For example, large air intakes flanked the traditional crosshatch Ferrari grille to help cool the engine compartment and front brakes. Radiator heat vented through a pair of ducts in the hood and a C-shaped outlet high on each front fender. A small scoop aft of each door directed cooling air to the rear brakes. All this could have looked busy and contrived, yet the overall effect was one of purposeful, elegant simplicity.

More intriguing still was the flowing semi-fastback roofline, with flying buttresses flanking a rear window curved radically inward from vestigial rear-quarter glass. No mere gimmick, and extensively tested in the wind tunnel, this treatment worked with the front-end shape and a rear underbody diffuser to generate stabilizing, raceworthy downforce: over 335 pounds at 190 mph and 420 at the estimated 205-mph maximum speed.

This allowed the 599 to use just a subtle, air-smoothing lip on its decklid instead of a showy rear wing as on so many high-powered exotics. The careful surface development also yielded a drag coefficient of 0.336, a good result considering the broad frontal area.

Suspension components were mostly borrowed from the 612, but spring and damper rates were suitably revised for the shorter wheelbase and some 250 pounds less curb weight. The Ferrari 599 GTB Fiorano also employed the same type of aluminum spaceframe construction to weigh some 88 pounds less than the Ferrari 575 berlinetta, this despite its increased size.

An undeniable part of the Ferrari 599 GTB Fiorano's magic was its 5999cc V12 (the model number stems from that displacement divided by 10). This was basically the 65-degree quad-cam unit developed for the mighty Enzo, but retuned -- not detuned, Ferrari insisted -- for tractability in daily driving.

Although horsepower declined from 650 to 611, the Fiorano delivered more torque over a wider rev range. And though maximum torque, a muscular 448 pound-feet, came at a fairly heady 5600 rpm, over 90 percent was available from only 3500 rpm, just where you want it in a fast GT.

Like the Enzo V-12, the Fiorano unit employed dry-sump lubrication and a small-diameter twin-disc clutch, which allowed placing the engine much lower and further back in the chassis compared to the Maranello layout. That, in turn, benefited handling by lowering the center of gravity and shifting front/rear weight distribution from 50/50 to 47/53 percent, again desirable for a high-performance rear-wheel-drive car.

As in the Maranello and 612, the transmission mounted at the rear as a transaxle, with the usual choice of a six-speed manual or Ferrari's six-speed F1 sequential manual. Ratios in both were slightly shorter (numerically higher) versus 612 gearing for better acceleration, and the F1 gearbox got a new "Superfast" electrohydraulic mechanism that reduced shift lag from the Maranello's 250 milliseconds to just 100 milliseconds. 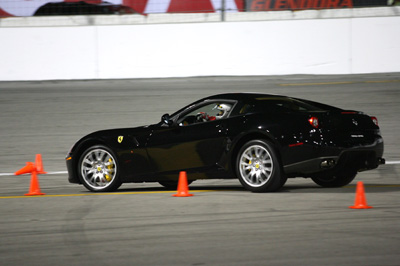 The Ferrari 599 GTB Fiorano can achieve 0.97g on the skidpad.­
Maury Phillips/WireImage for May Day Production

Also on hand -- literally -- was Ferrari's manettino vehicle dynamics controller, a rotary knob mounted on the steering wheel at "4 o'clock." (A red engine-start button sat opposite at "8 o'clock.") In the 599, the manettino controlled five sets of parameters governing throttle action, F1 gearbox shift points and smoothness, and intervention of Ferrari's "F1-Trac" stability/traction-control system.

Also under its purview was the driver-adjustable SCM suspension, the initials denoting "magnetorheological suspension control." This referred to shock absorbers with a special fluid that instantly changed viscosity, and thus damping firmness, as directed by an electric current. Ferrari developed it in conjunction with America's Delphi Corporation, which supplied a similar system for the 2003 Chevrolet Corvette and several later General Motors cars.

Revisions to the F1-Trac stability control also enhanced roadability. As Ferrari explained it, the updated system "monitors the speed of both front and rear wheels and features predictive software that estimates the maximum available grip in advance, compares this information with [a stored] vehicle dynamics model ... and adjusts its reactions to suit, optimizing traction by modulating power delivery." Ferrari claimed this as world first while asserting it provided "easier, smoother high-performance driving."

The Ferrari 599 GTB Fiorano manettino had "Ice" and "Low Grip" positions for challenging weather, but keen pilots paid more attention to the other three: corsa (Race), giving the most aggressive characteristics; Sport, providing "the best balance between stability and performance on the road," and Off.

As on other recent Ferraris, a dashboard screen displayed the manettino setting, plus trip data, tire pressure and temperature, even lap times. A final gee-whiz touch, but useful, was the bank of five tiny lights in the top of the steering wheel rim to indicate optimal shift points. 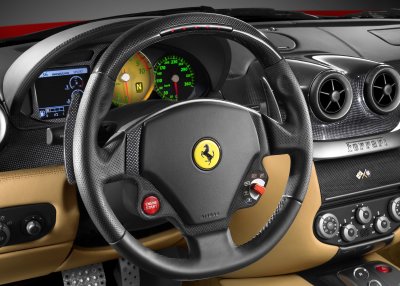 The Ferrari 599 GTB Fiorano delivers a wealth of information in the cockpit.
© Ferrari S.p.A.

Despite such "Speed Racer" accoutrements, the Ferrari 599 GTB Fiorano was every inch the luxurious, all-day comfortable two-seat Ferrari. The cockpit was not only spacious (thanks to the long wheelbase) but beautifully crafted from fine leather, aluminum and carbon fiber. The two contoured seats were power operated, as were the windows, mirrors, door locks, and tilt/telescope steering wheel. Dual-zone automatic climate control was included, as were heated mirrors and keyless entry.

Options were plentiful, needless to say, as Ferrari was now determined to satisfy every possible "client" request. For example, the 599 tested by Road & Track for its May 2007 issue arrived with the worthwhile CCM brakes (at $18,550), plus carbon-fiber door panels and sills ($5790), a leather/CF steering wheel ($5621), heated Recaro seats ($3710), theatre-quality Bose audio ($3260), leather headliner ($439), and the almost obligatory cavallino rampante front-fender emblems ($1743).

With these and other add-ons, the formidable $278,345 base price swelled to an eye-popping $319,408 delivered. Such is the price of excellence born of world-beating competition experience.

But as always with Ferraris, mere numbers don't begin to tell the story. "The more time you spend in the [Ferrari 599 GTB Fiorano], the more you respect it," R&T enthused. "You can't help but be impressed by a car classified as a GT machine that can perform with the world's best sports cars. And sure, it handles great and looks great. But eventually you realize something: What defines the 599 is that awe-inspiring 611-horsepower V-12; the unreal power to which you never get accustomed, the way it wants to shred the rear tires under full throttle. And the most raucous, intoxicating exhaust note this side of a race car." No wonder the Ferrari 599 GTB Fiorano was instantly acclaimed the world over as one of the all-time great Ferraris.

It was certainly a grand prelude to Ferrari's 60th anniversary year. And happily, its story is just beginning. Those in the know say a Ferrari 599 spider is just around the corner, followed by track racer and perhaps even a new "roto-top" Superamerica version. We can hardly wait.