Browse the article What are the most famous motorcycle rallies in the U.S.? 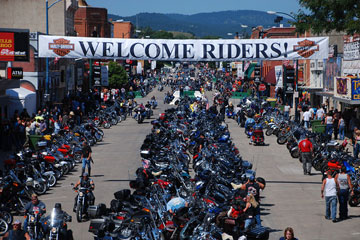 Up to 650,000 bikers attend the annual Sturgis Motorcycle Rally in the small town of Sturgis, S.D.
Photo courtesy of the City of Sturgis Rally Department

Get into any conversation about motorcycle rallies, and you're likely to hear first and most often about the big four: Sturgis, Daytona, Laconia and Myrtle Beach. With attendance estimates generally around a half-million riders every year, these are the most famous and the oldest of all our nation's bike gatherings. Builders, vendors and manufacturers treat them like expos, meaning a rally is also your chance to see the newest bikes, improvements and modifications before anyone else.

The Sturgis Motorcycle Rally, which takes place in mid-August in South Dakota, gets up to 650,000 attendees, depending on gas prices in a given year. It was founded in 1938 and it's only been called off twice, thanks to rationing during WWII. This tiny town in the Black Hills only has about 7,000 full-time residents, which makes it even clearer how big a deal this rally has become. Dramatic landscapes and runs offer excitement, while the sheer volume of fellow riders ensures that you'll have a blast.

Daytona Bike Week started in 1937 but spent five years (1942 to 1947) on hiatus during World War II. At least, officially. Many bikers found their way to Daytona during that time anyway, to continue the week's events. Close to Silver Springs, Kennedy Space Center, and several theme and water parks, Daytona's great as a home base if you'd like to explore the surrounding countryside -- but with traditions like Big Daddy Rat's Custom Chopper Show and coleslaw wrestling matches, you may find it difficult to tear yourself away.

Further north, there's Laconia Motorcycle Week in Laconia, N.H. Started in 1924, Laconia is now generally known as the third largest of the big four. Famous for its Biggest Beer Belly contest and thrilling demo rides, it's also close to a few other spots of interest, such as the Motorcyclist Shrine in Colebrook, a few hours north, and the reenacted frontier life of Charlestown, a couple hours southwest.

Myrtle Beach Bike Week, now in its 70s, takes place in mid-May. Its location on the coast makes Myrtle Beach beautifully temperate that time of year, although the town plays host to a few other rallies throughout the year. Motocross racing, custom motorcycle shows and a vibrant live music scene add to the fun. Within a couple of hours' driving distance of castles, wildlife refuges and even a USS Battleship, Myrtle Beach pretty much has it all.

But it's not just about size and history. Several smaller, newer rallies have created their own following over the years, and in some cases are even starting to compete with the larger rallies.

The Little Sturgis Rally & Races for Charity, which takes place in Little Sturgis, Ky., in mid-July, promises "the biggest biker party in Kentucky." While this adults-only rally has much support from the tiny local community (it's a town of approximately 2,000), it's still coming into its own. But any event that prides itself on dirt drags and pudding wrestling matches probably won't take too long to become well-known.

The Laughlin River Run, in Laughlin, Nev., is quite popular and much talked-about. Taking place at the end of April since 1983, this southern Nevada rally services much of the southwest. Between the weather and wide-open roads, the Nevada entertainment and the big-name bands coming through the town, it's no surprise.

Biketoberfest, in Daytona Beach, Fla., takes place, as its name might suggest, in mid-October every year. While a sometimes contentious relationship with city management can make for a sticky official situation, riders coming into the area are always happy to help the local economy by holding some events outside of Daytona Beach itself. The festival's Biker Bash on the Beach, Main Street Rally, Motorcycle Expo and Rajun Cajun Fest are legendary, and the sights and nearby sounds -- the Space Center, Sea World and Walt Disney World, to name a few -- ensure that Biketoberfest isn't going anywhere.

The Republic of Texas Biker Rally, held in and around Austin on the first weekend after Memorial Day, is known for being laid back in classic Austin style. While officially the rally runs from Thursday to Saturday, Texas welcomes its 40,000 registered riders (and around 150,000 unregistered street-party guests) with a Biker's Breakfast the Wednesday prior and a Sunday night post-rally concert. There's also the traditional Big Texas Chop-Off Biker Buildoff, the highly popular Biker Street Party on Congress Avenue, and the Guinness World Record-breaking (in 2006, but still a sight to behold) motorcycle parade to the state capital. 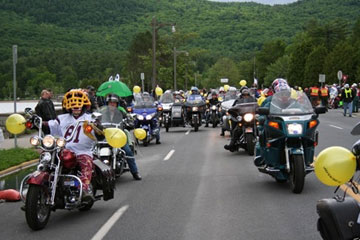