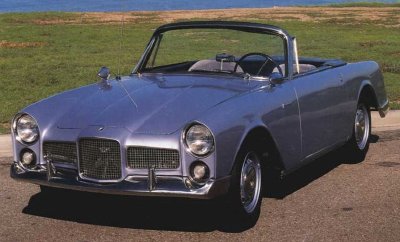 Facel Vega’s only convertible was the neat “2 + 1” Facellia and its Facel III and Facel 6 evolutions. A coupe version was also offered.

Though Facel Vega was one of history’s more successful “hybrid” marques, it went bust after a relatively short 10 years. The main reasons were an over-reliance on high-priced cars, lack of financial depth (which prevented correcting flaws), and stiff competition from thoroughbred marques like Aston, Porsche, and Ferrari. But the deciding factor was the Facellia, a smaller, less expensive car whose poor engine reliability and high resulting warranty claims literally cost Jean Daninos his shirt.

Launched in October 1959, less than a year after the HK500, the Facellia had a distinct Facel look, with the same sort of square central grille, flanking sub-grilles, and vertical head/parklamp clusters. In appearance, it forecast the later Facet II, leading some folks to confuse the two models, though the Facellia was not only smaller and less spacious but a lot slower. A tubular chassis, coil-spring/wishbone front suspension, live rear axle on semi-elliptic leaf springs, cam-and-roller steering, and Dunlop disc brakes were all familiar, though no components were shared with the V-8-powered senior Facels.

That naturally included the body, a new all-steel convertible style that was welded to the chassis on initial assembly. Seating was of the “2 + 1” variety, and a lift-off hardtop was offered as an optional alternative to the standard folding fabric roof. Dimensionally, the Facellia rode a nine-inch-shorter wheelbase than the HK500 and Facel II, had narrower 51.25-inch front and rear tracks, and weighed almost half as much.

The Facellia engine -- and Daninos’s ultimate downfall -- was a new twincam 1647-cc four, specially designed by Britain’s Westlake Engineering and finalized by ex-Talbot engineer Carlo Marchetti. Dual downdraft Solex carburetors were initially fitted, but double twin-choke Webers were also available from mid-1961. Compression ratio was 9.4:1, necessitating high-octane fuel, but the resulting 115 bhp was competitive with the latest Alfa Romeo and MG twincams. Both the engine and 4-speed gearbox (automatic wasn’t offered this time) came from Pont-a-Mousson -- curious, as the French concern had never built an engine before.

The Facellia's styling mimicked that of the Facel II but on a smaller scale.

Daninos had conceived the Facellia to rival established small/medium roadsters like the Alfa Giulia, Triumph’s TR, and the new MGB, planning to build 5000 a year once production hit full stride. Facel certainly had the facilities to compete in the volume sports-car market, as it had once supplied large numbers of bodies to other automakers. And the car itself was competitive: fast (as one example proved in officially observed speed runs), a decent handler, attractive, and civilized.

But for once, success eluded Daninos. Though the Facellia got an encouraging reception from the press, severe engine problems surfaced almost as soon as deliveries began. The main problem, piston burning, couldn’t be traced right away, and it wasn’t long before buyer interest evaporated. As with the MGA Twin Cam, which experienced similar traumas, the trouble was eventually diagnosed (poor block cooling), but by then it was too late. American buyers, still Daninos’s chief target, didn’t expect to have to heave to with wrenches or attend to major engine work every 40,000 miles. Moreover, parts and dealers were both scarce in the U.S., a situation that wreaked havoc with sales.

As a result, only about 500 Facellias were called for and Facel’s fortunes began sinking fast. By 1962, the firm had slipped into receivership.

But the following spring, the receivers attempted a comeback with the Volvo-powered Facel III, basically a Facellia with the Swedish firm’s much more reliable 1.8-liter overhead-valve four. Some 1500 were sold, which kept Facel alive through the end of 1963.

Then hope for a rescue appeared as the SFERMA subsidiary of Sud-Aviation agreed to manage Facel for the following 12 months. The new guard briefly considered another derivative powered by an aluminum twincam Facel four with up to 200 bhp, but that only implied more of the problems that had plagued the Facellia.

Ultimately, they settled on the BMC 3.0-liter ohv six as used in the Austin-Healey 3000, debored to 2.8 liters and 150 bhp to get under France’s 15 chaveaux tax limit, for a mildly modified Facellia called Facel 6. But there was still no getting around the Facellia’s poor reliability image, and just 26 were built.

By the end of 1964, Facel had negotiated in vain for use of the BMW 2.0-liter sohc six, and SFERMA had refused to continue managing the firm. Facel S.A. was quietly liquidated in early 1965, thus ending Jean Daninos’s dream of a new French GT dynasty.