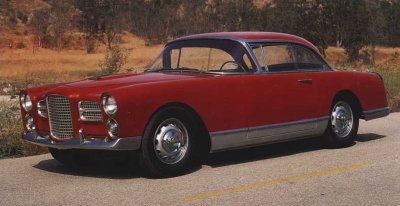 It’s been said that nothing succeeds like excess. It sure did in the Fifties -- which may explain why the second-generation Facel Vega, the HK500, was simply more of the same. Announced in 1959, the new HK500 retained the basic chassis design of the original FVS, but had updated running gear and a restyled body of altogether more “transatlantic” character. The result, said veteran Mechanix Illustrated magazine tester Tom McCahill, was “sexier than the Place Pigalle and throatier than a Russian basso...a sporting piece of equipment that looks like money, which is exactly what it costs [$9,795]...a car to be appreciated as a remarkable and wonderfully satisfying road companion.”

The HK500 continued on the 105-inch wheelbase of the last FVS, so accommodation remained more 2 + 2 than full four-seater. (One British scribe said it helped if you had very small friends for back-seat passengers.) Still, the new envelope was smarter and more contemporary. The FVS had been somewhat rounded, more Forties than Fifties, but the HK500 was crisper and more Detroit-inspired, right down to stacked quad headlamps and a fully wrapped windshield with “dogleg” A-pillars.

The HK500 also continued Facel’s fondness for Chrysler V-8 power. Early examples carried the 325-horsepower, 354-cubic-inch hemi engine as in the ’58 FVS, but this gave way within a year to the American firm’s new 383-cid wedge-head unit, with two four-barrel Carter carburetors and a rated 360 bhp in this application.

As the HK500 weighed little more than the FVS, the bigger motor gave truly formidable performance. Top speed was at least 140 mph, and the 0-60 mph sprint consumed less than 8.5 seconds. Fuel economy, though, was more dismal than ever: only about 14 mpg, a big drawback in Europe. Pont-a-Mousson 4-speed manual and Chrysler 3-speed TorqueFlite automatic were available as before. So were the Dunlop all-disc brakes, but Facel sensibly made them standard equipment from 1960 on, along with power steering.

Though faster, more stylish, and more roadworthy than its predecessor, the HK500 was still mainly a grand touring machine a comfortable, lavishly equipped high-speed cruiser of obvious quality.