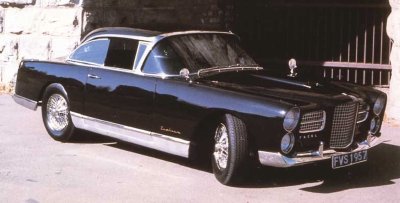 FVS succeeded Facel’s original Vega. Styling predicted that of the forthcoming HK500, which would be produced in 1959.

A patriot and motoring enthusiast, Jean Daninos resolved to build a new postwar car that would return his native France to prominence in the GT field -- the Facel Vega. The tricolor certainly had few high-performers by the early Fifties. Deutch-Bonnet and Alpine-Renault were hardly in Ferrari’s league, Bugatti and Delage were moribund, and Talbot-Lago was soldiering on, nearly bankrupt, with its old 4.5-liter GS.

Daninos was in an excellent position to correct this situation. Before World War II he’d founded Forges et Ateliers de Construction d’Eure et de Loire -- FACEL for short -- and it had built most everything including the kitchen sink: scooters, office furniture, military vehicle bodies, combustion chambers for deHavilland and Rolls-Royce jet engines. By 1954 it employed 2000 workers at four factories, and was also building car bodies for Delahaye, Ford France, Panhard, and Simca. Lending impetus to Daninos’s idea was surplus production capacity at his Colombes facility, created when Panhard cancelled a new model.

High postwar taxes severely limited French-market demand for cars with rated horsepower above 15 cheveaux, so the new GT would have to survive largely on export sales. What better way to assure that than by using foreign mechanical components? Daninos first tried putting a smooth new coupe body on the 4.3-liter Bentley chassis for the 1951 Paris Auto Show.

This Facel-Bentley was well received, and six were ultimately built. But Bentley chassis weren’t cheap, and Facel could make its own. Moreover, it was already producing attractive 2 + 2 hardtop bodies for the Ford France Comète/Monte Carlo. Why not a larger version with a few distinctive touches?

The result of all this was the first Facel Vega, introduced in July 1954. The chassis was a simple but rugged tubular affair with channel- and box-section reinforcements around the engine bay and rear axle. It’s credited to Lance Macklin, a recent member of the HWM racing team with Stirling Moss and Mike Collins, and son of Sir Noel Macklin of Railton fame. M. Brasseur helped with the body styling but, as The Autocar noted, Daninos himself was “the project engineer, designer, and indeed the driving force behind the whole enterprise.”

For power, Daninos gave the Facel Vega what was technically the world’s best V-8: the Chrysler Corporation hemi in its 276-cubic-inch DeSoto version, basically stock but rated at 180 horsepower for this application. It drove the rear wheels through either a French-made Pont-a-Mousson 4-speed manual or Chrysler automatic transmission (2-speed PowerFlite initially, 3-speed TorqueFlite after 1956).

Suspension was conventional: independent with coil springs up front and a live axle on semi-elliptic leafs at the rear. Steering was cam-and-roller, the hypoid final drive came from Salisbury, and slotted steel or Robergel wire wheels ventilated 11-inch-diameter aluminum drum brakes all-round.

Intended as a big and brawny routes nationale cruiser, not a “turn-on-a-dime” sports car, the Facel Vega was massively engineered and thus heavy (over 3700 pounds), but could easily exceed 100 mph. The cabin was rather undersized but lush, with leather trim and an impressive array of instruments and switches. A predictive feature was the fold-down rear seatbacks for interior access to the trunk, which had a regular external lid.

Facel interiors for the Facel Vega and FVS were typically lush, bright, and woody.

There was nothing regular about the Facel Vega’s workmanship -- it was impeccable. Body panel fit was faultless, rust-resistant stainless steel was used for brightwork, and interior materials were of the highest quality. No wonder the price was a lofty $7000 -- about as much as a contemporary Rolls-Royce Silver Dawn -- and that only 46 Vegas were built through 1955.

At least Daninos had the good sense to target California, land of the rich and famous, as his prime export market, choosing Charles Hornburg, the west coast Jaguar distributor, as his main dealer. Later, for the east coast, Daninos signed on import-car baron Max Hoffman, who’d continue to sell Facels through 1963.

Following adoption of a 291-cid engine, Daninos launched an improved Facel Vega in 1956. Called FVS (for Facel Vega Sport), it carried an even larger, 330-cid Chrysler hemi with 325 bhp, and was distinguished (if that’s the word) by an American-inspired wraparound windshield. Power steering and brakes were offered by 1957, and optional four-wheel disc brakes arrived for 1958, the model’s last year, along with a 1.5-inch longer wheelbase and a 225-bhp 354-cid hemi. Alas, these cars suffered poor front-end geometry, which necessitated frequent wheel alignments and suspension overhauls after only 20,000 miles. But performance was terrific: as little as 9.5 seconds 0-60 mph and up to 134 mph all out.

The first-generation Facel Vega was unquestionably in the grand routier tradition, spiritual heir to the prewar greatness of Delage and Delahaye. It was also a commendably professional effort for a new manufacturer. In fact, Daninos not only sold all he could build (including 11 special convertibles) but actually made a modest profit, which set the stage for a more ambitious effort, the HK500.