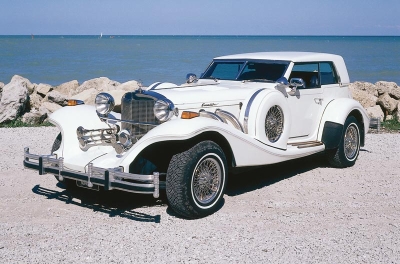 1985 Series IV roadster was one of the last vehicles created under Excalibur's original ownership.

With the bigger and heavier Excalibur performing below customers’ expectations, plus the start of a severe recession and lofty new inflation-fueled prices -- initially near $40,000 -- Excalibur sales nosedived. It couldn't have happened at a worse time for the Stevens family, who faced burdensome new overhead costs from a heavy revamping of their suburban Milwaukee plant (to improve quality).

The result was a steadily worsening situation that forced the brothers to file for Chapter 11 bankruptcy in mid-1986. Ironically, this came just after Excalibur marked its 20th anniversary with its first commemoratives: 50 roadsters and 50 phaetons bearing two-tone exteriors with chrome sweep­spears and pewter plaques, plus interiors trimmed in walnut and Connolly leather.

But then came help in the form of Henry Warner, president of Acquisition Company of Wisconsin, who bought the Stevens family's interests and reorganized the firm as Excalibur Marketing Corporation.

By early 1987, Series IV roadsters and phaetons were again trickling out of Milwaukee as Series V models. Their main difference was a more-potent 350 Chevy V-8 option that partly redressed the weak performance of the standard 305.

At midyear, EMC revealed a whopping four-door Touring Sedan on a 144-inch-wheelbase chassis (essentially a 20-inch stretch of the phaeton's square-tube ladder frame). Measuring 224 inches long and weighing 4400 pounds, the Touring Sedan was optimistically priced at the same $65,650 figure applied to both open Series Vs, with which it shared frontal styling. Interiors were opulent. A front bench replaced the phaeton's buckets, and the long wheelbase made for a rear compartment worthy of a '30s Cadillac Sixteen. Also announced was an even-more-extravagant 204-inch-wheelbase "grand limousine." David Stevens had earlier conceived both these closed models as sales-building "line extensions."

But none of this served to boost sales and thus attract needed capital to offset mounting debts in an economy again gone slack. Nor did a three-year, $9-million lease deal with a Chicago concern involving some 150 cars. As a result, Excalibur went bankrupt again, production ceasing in June 1990.

But Excalibur wasn't quite dead. In November 1991, German Michael Timmer bought the firm for $1.33 million amid charges that the Warner regime engaged in odometer fraud, installed some used parts, failed to meet federal passive-restraint rules, and generally did its best to "kill" the company. Timmer seemed bent on saving it, putting $1 million toward plant improvements with an eye to resuming production by April 1992. There would be four models: Series V roadster, phaeton and sedan, plus, surprisingly, a revived Series III roadster. Prices were targeted for the $50,000-$75,000 range.

Unfortunately, Timmer ran out of money before he could build any cars, so Excalibur was again bankrupt by early '92. But it was still alive, thanks to a new rescue by the German father-and-son team of Udo and Jens Geitlinger, who'd made a fortune in real estate. With help from production boss Scott Dennison and some 33 other employees still hanging on from prior regimes, Jens picked up where Timmer left off, issuing an updated Series III roadster called the "Limited Edition 100."

Besides design changes for all the latest safety and emissions standards, including a driver-side air bag, the Geitlinger Series III carried the new 300-bhp Corvette LT1 V-8 teamed with four-speed automatic or optional six-speed ZF manual. Price was set at $89,842. At the same time, the big limo was to get a new dash and GM suspension to sell for a staggering $124,774. The other Series V cars weren't forgotten, being muscled up to L98 Corvette power and starting prices of $74,986 for the roadster and $77,691 for the phaeton. The Geitlingers eyed total first-year production of 60-80 units, and Dennison predicted 120 Excaliburs per year starting in 1993, with some two-thirds earmarked for export.

But the world market had also changed dramatically, and Excalibur could no longer do business as usual. Accordingly, the firm diversified in 1993, first by adding a replica Shelby-Cobra with some interesting deviations from the original, then by becoming a contract supplier of various "accessories" like luggage racks and "aero" cab extensions for trucks. Motorcycle trailers were also built. Car production ended in 1997, but accessory production continued until the early 2000s when Excalibur once again went into receivership.

In 2003, Alice Preston, who had worked with Brooks Stevens since 1963, purchased the assets of Excalibur Automobile Corp. The company continues selling parts and performing restorations on the 3200 Excaliburs produced. Excalibur hopes to someday resume auto production using its former body styles.