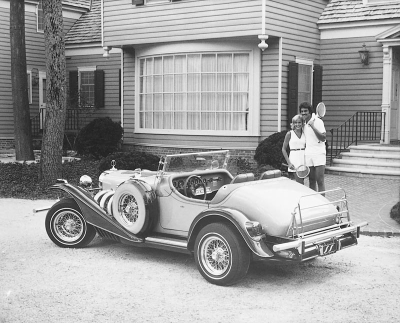 Prices and production began taking off with the Series III, which arrived in 1975 (Excalibur has never adhered to strict model years). This was basically the Series II design modified for tightening safety/emissions rules, but not so much as to compromise styling or roadability that were, by now, Excalibur hallmarks.

Besides "shock mounted solid aluminum alloy [bumpers that] meet government standards for absorbing impact," Series IIIs boasted fuller clamshell-type fenders and standard high-back bucket seats covered in leather and made -- like most of the car -- by Excalibur itself.

The main mechanical alteration was switching to Chevy's big-block 454 V-8, which could be emissions-tuned with less loss of power and torque than the small-block 350. Both roadster and phaeton carried identical 1975 starting prices of $18,900, more than double the original figure of a decade before. And prices would go much higher, reaching $28,600 by the end of this series in 1979.

By any standard, Excalibur was still a tiny automaker, but the Stevens brothers would not be rushed. Nor did they want to dilute their market with too much of a good thing. As it had since 1969, the more-practical four-place phaeton continued outselling the two-seat roadster, but total volume remained minuscule even for a specialty maker. The Series III saw but 1141 over five years, versus 342 for the Series II and 359 for the original Series I.

Excalibur had traveled far since David and William C. "Steve" Stevens built their first cars (the latter even worked on the assembly line until 1968). Striking evidence of their progress arrived in 1980 with an elegant new Series IV. More luxury tourer than lightweight sports machine, it was the most radically changed Excalibur in history. Wheelbase was stretched to a limousine-like 125 inches, and there were more standard accoutrements than any previous Excalibur. Styling, now by David Stevens, remained firmly "Classic," but was smoother and sleeker in the way that the late-'30s Mercedes 500/540K was evolved from the SS/SSK. The phaeton acquired a lift-off hardtop plus fully powered soft-top; the roadster gained a rakish rumble seat.

Most engineering changes came per federal edicts. The most notable was a vastly smaller Chevy V-8, the well-known 5.0-liter/305-cid unit, linked to four-speed overdrive automatic as the sole transmission choice. Excalibur feared a larger engine would have lowered fuel mileage to the point of having to pay fines under Corporate Average Fuel Economy rules, something the tiny firm just couldn't afford. As a result, customers were saddled with a much bigger and heavier Excalibur that was far from exciting on either straights or curves.