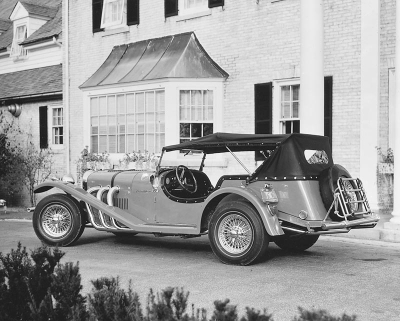 The 1966-69 Series I SS phaeton won fans with a roomy interior and superior handling on both curves and straightaways.

The earliest Excaliburs were bodied in hand-hammered aluminum, but fiberglass was soon substituted. Also for reasons of cost and practicality, the prototype's sheet-brass radiator was exchanged for a cast-aluminum affair. Atop it was Brooks' "sword-in-circle" mascot that simulated, but didn't infringe upon, M-B's jealously guarded three-pointed star. Dominating the cockpit was a full set of white-on-black Stewart-Warner gauges in a vintage-style dash with engine-turned metal appliqué. Seats were modified Studebaker buckets covered in vinyl. With all this, the Excalibur's announced price looked unbelievably low: $7250 for a hand-built car with one of the most-competent chassis in the business.

Encouraged by intense initial interest in the SS -- and ready buyers -- the Stevens family added two companion models in 1966: a more-elaborate roadster with full fenders and running boards, and, late in the year, a four-place "phaeton" convertible. The latter was surprisingly roomy. David Stevens proudly pointed to top-up headroom within an inch of a Cadillac Eldorado's and legroom that was actually greater. Also in '66, the firm changed its name to Excalibur Automobile Corporation.

Prices inevitably escalated, reaching a $10,000 minimum by '69, but Excaliburs remained a remarkable value. Not until 1976 would they become $20,000 automobiles, and then only because of inflation and the cost of federally mandated safety and emissions equipment. At least the hikes were made less painful by progressively upgraded materials and features. By 1969, no-cost features had expanded to include air conditioning, heater/defroster, variable-ratio power steering with tilt wheel, power front-disc brakes, steel-belted radial tires on chrome-plated wire wheels, the same as twin sidemount spares, luggage rack, AM/FM stereo, leather seats, air horns, driving lights, rear air shocks, "Positraction" limited-slip differential, and self-shift Turbo Hydra-Matic transmission (the last two from GM, of course).

Excalibur production would never be high, but was never intended to be. This was, after all, a labor of love, a gift from the Stevens family to enthusiasts of traditional motoring in the grand Classic manner. After the 56 SS roadsters of 1965 came 90 Series I models in 1966, but production never topped 100 per year through 1972.

Announced in 1970 were Series II Excaliburs with new 111-inch wheelbase and the Corvette's latest 350 V-8. The original roadster was dropped, but the other two models returned at higher $12,000 starting prices. A notable advance was a modern new box-section chassis purpose-designed by David Stevens around Corvette suspension components, thus ousting the old Lark frame (Excalibur's inventory had run out anyway). Turbo Hydra-Matic moved to the options list in favor of a GM "Muncie" four-speed manual gearbox. Independent rear suspension and standard all-disc power brakes combined with Goodyear Polyglass tires on specially designed wire wheels to provide a fine blend of ride comfort and adroit handling. Acceleration was a bit slower despite unchanged ­horsepower -- but not much: A Series II could scale 0-60 in six seconds and reach a genuine 150 mph.