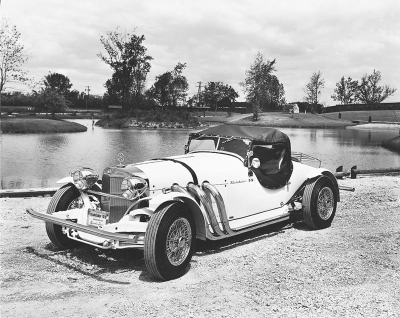 The 1964 Studebaker SS, such as the roadster shown here, was an early prototype for Excalibur.

Noted industrial designer Brooks Stevens has given us a number of interesting cars, none more exciting than his own Excalibur. The first was actually a series of light race-and-ride roadsters built in 1951 with "vintage-modern" bodywork on a 100-inch-wheelbase Henry J chassis.

Though strictly a private effort, these "Excalibur Js" did well enough in competition for Stevens to hope that Kaiser-Frazer might build his design for sale to the public. But K-F had just failed with its fiberglass-bodied Darrin two-seater and would flee the U.S. market after 1955, leaving unfilled Stevens' dream of a new car with classic '30s styling.

The dream got another chance in 1963 at Studebaker, where Stevens had been a design consultant for four years. Having completed clever, low-cost facelifts on the compact Lark and sporty Hawk coupe, he was asked by company president Sherwood Egbert to devise some 1964 show cars that would bolster Studebaker's public image in the face of steadily declining sales. The firm had just closed its century-old South Bend, Indiana, plant, canceled both the Hawk and Egbert's radical Avanti, and retreated with a reduced Lark line to Hamilton, Ontario, Canada. With things looking so terminal, Egbert hoped Stevens' specials would convince people that Studebaker still had a future.

Stevens did his best, but time permitted only a trio of dolled-up Larks that didn't make much of an impression at Chicago in February 1964. But for the next major event, the annual New York Auto Show in April, Stevens was determined to have something that would "get people to come to that damn booth." Though Egbert had departed (stricken by cancer), his successor, Byers Burlingame, agreed to cooperate.

The idea was a "contemporary classic," a new car that looked like the Mercedes SSK that Stevens once owned. "I wanted this to be a replica [for those] who could not play in the collector's market even then [and for those who wanted] a "two-way classic,' something that you can be sure will get you back home..." Stevens duly rendered a dashing neoclassic roadster body, and a Lark Daytona convertible chassis was delivered to his Milwaukee studios with power front-disc brakes and supercharged, 290-horsepower Studebaker 289 V-8. The result, labeled "Studebaker SS," was completed in just six weeks by Stevens and his sons, David and William.

No sooner did it reach New York than Studebaker backed out. A "contemporary classic," said company officials, conflicted with their newly embraced image of the "common-sense car." Undeterred, Stevens arranged to exhibit the SS in a separate space. Luckily, he wound up across from a hot-dog stand, but the cycle-fendered two-seater would have drawn crowds anyway. It was, in fact, a sensation, and dozens of inquiries from would-be owners prompted the Stevens sons to form SS Automobiles in August. By 1966, they had built 56 copies of a mildly modified version bearing the Stevens-registered name Excalibur and also called SS.

Studebaker, meanwhile, had ceased building cars at last, thus ending the availability of its 289 V-8, but General Motors friends Ed Cole and "Bunkie" Knudsen agreed to provide the Stevens family with Chevrolet 327s in 300-bhp Corvette tune. This change made the lithe 2100-pound Excalibur a blistering performer. Even with standard 3.31:1 rear axle, 0-60 mph took less than five seconds, a big improvement over the Studey-powered car's seven seconds. And projected top speed was 160 mph!

Though undeniably old, the 109-inch-wheelbase Studebaker chassis had several advantages for a "contemporary classic." Unlike newer torque-box designs, it was quite narrow and thus a perfect fit for the slim, '30s-style Excalibur body; and as a convertible platform, it was firmly X-braced. Still, it required considerable reworking to ensure safe handling with such a high power-to-weight ratio.

That task, and many others, fell to David Stevens. The vintage-style cowl, for example, forced a lower steering column and pedals. He also had to decrease spring rates and alter caster and camber, but the result was a car as fast on curves as it was on straights. This modified chassis continued under all "Series I" Excaliburs built through 1969.

Brooks Stevens, of course, was responsible for the styling, which was deliberately planned as an evocative but not line-for-line rendition of the 1928 Mercedes SSK. Interestingly, though, initial sales literature was done in prewar Mercedes style.

Quality was uncompromising from the start, and would continue to distinguish Excalibur from the motley group of "replicars" it inspired. As just one example, Brooks Stevens turned to Mercedes-Benz's original German supplier for the simulated outside exhaust pipes and used French-built freestanding headlamps closely resembling original SSK equipment.