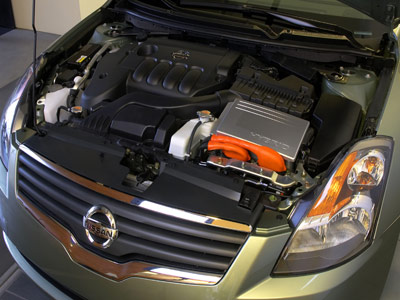 Global warming, dependence on foreign oil, and the high price of gasoline have people thinking about alternative fuels for the cars of the future. While there are many potential new fuels out there, one of the most researched -- and most promising -- is simple electricity.

Automakers have already started experimenting with electric vehicles. Electric vehicles have three basic parts: the batteries, which are the power source for the car; the motor, which converts the power into useable energy that can turn the wheels; and the controller, which works like a big dimmer switch to regulate the electricity.

To refuel an electric vehicle (EV), all you need is an electrical outlet. Any standard household outlet will do, but an outlet with higher voltage will do the job faster. Some cities, like Portland, Ore., are installing curbside charging units so that current and future EVs will be able to top off their batteries themselves while their owners work or run errands.

­The EVs available today can't yet replace all the gasoline-powered cars and trucks on the road. EV speeds are usually low, about 35 miles per hour (56 kilometers per hour). Most EVs can travel about 40 miles (64 kilometers) per charge, which is roughly the same distance as the average daily American comm­ute. The cars can charge overnight at a regular outlet or in a few hours at a higher-voltage outlet. They also have zero emissions.

Most of the advances being made in EVs are in battery technology and design. Lead-acid batteries were used for decades -- even in the early 1990s, when EVs first became popular. However, lead-acid batteries don't get people as far as we'd like, or as quickly. Read on to find out where and how labs are working to improve EVs for modern consumers. 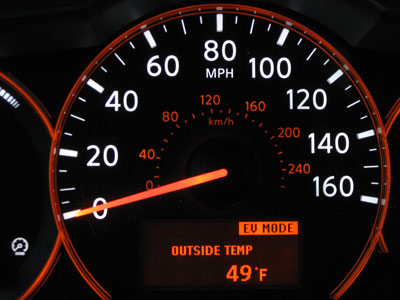 If there's research to be done and breakthroughs to be made, it makes sense that it would happen in a university lab. Several universities have battery and EV laboratories, but we'll take a look at two that exemplify what's being done at schools around the world.

University of Massachusetts at Lowell

University of Massachusetts at Lowell

At the Lowell campus of the University of Massachusetts (UMass), mechanical and electrical engineering professors work with students at the Center for Electric Car and Energy Conversion (EC&EC). There are five labs contained within the center: the Renewable Energy Lab, the Electric Car Lab, the Battery Evaluation Lab, the Power Electronics Lab, and the Advanced Composite Materials and Textile Research Lab.

The EC&EC at UMass-Lowell covers many subjects in these five labs, from the energy used in batteries to the crashworthiness of new car designs, but the center places a special focus on renewable energy. In order for an EV to be a true zero-emissions vehicle, the source of the power that recharges the batteries should be clean as well. This has led the center to design improved photovoltaic cells for solar panels and more efficient ways to convert wind energy to electricity. The results of this work are products that can be used in the clean energy industry and students who have the technical know-how to work and innovate in the EV field once they graduate.

University of California at Davis

University of California at Davis

Engineers at the Plug-in Hybrid Electric Vehicle (PHEV) Research Center in Davis, California, are working on extended-range EVs. (Remember, most standard EVs only have a range of about 40 miles (64 km) per charge.) The program operates under the University of California at Davis' Institute of Transportation Studies, which focuses its research on the consumer end of PHEVs. These cars are a little different from purely electric vehicles in that they have a small, supplemental gasoline engine, but they can still recharge their batteries with a standard wall outlet.

One of the PHEV Research Center's projects evaluated new instruments inside the car's dashboard that could give drivers real-time information on energy usage, CO2 emissions, and more. The center's engineers also worked to improve charging technologies and evaluate new battery technologies, particularly the latest in lithium-ion cells. They also worked to establish the lifecycle costs of PHEVs, including manufacturing, maintenance, and emissions expenditures.

Read on to find out what auto manufacturers are doing in their labs to bring these EV technologies to the consumer. 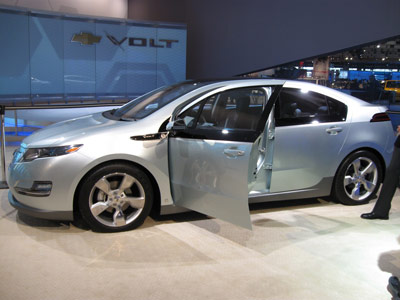 If GM can deliver on its promise, the Chevy Volt could bring electric cars to the masses by 2010.
Kristen Hall-Geisler

While universities are scrutinizing electric vehicles in search of potential problems, including issues with power sources, batteries, and lifespan costs, auto manufacturers are also researching EV technology to effectively build and sell these cars to everyday drivers.

Before an EV can be introduced to the public, it has to be fully tested in the lab and on the track. The batteries have to be reliable and safe, the car has to perform to consumer and manufacturer standards, and it all has to be delivered at a reasonable price. That's a tall order, but almost every major manufacturer is working on it in their labs. In fact, you may have heard about the creation process for the Chevrolet Volt, an extended-range electric vehicle (E-REV). GM has poured all of its engineering, design, and marketing power into this car since its introduction as a concept car at the 2007 Detroit Auto Show.

Most of the concept cars that get attention at auto shows can't actually be driven, and few of them make it to production. However, GM promised to deliver the Chevy Volt by 2010, which shifted its labs into overdrive. First, they had to devise a safe and workable power train. The Volt will be powered by lithium-ion batteries and will have a small gasoline engine (or an E85 engine built for an ethanol-gasoline mix) that will kick in to recharge the batteries after about 40 miles (64 kilometers) of all-electric driving.

Sometimes, even when the company is large and the product important, it's easier, faster and cheaper to outsource product research and development than to reinvent the wheel in your own lab. As an example, GM decided to get the batteries for the Volt from another company. After searching for months, the company settled on lithium-ion batteries from LG.

Other companies simply want to control as many parts as possible and are willing to invest in the labs needed to create them. Nissan is just one auto manufacturer that has its own on-site battery lab in Japan, which is currently researching power sources for its future electric vehicles and hybrid-electric vehicles. Engineers work with smaller, prototype versions of the full-sized lithium-ion car batteries to determine their capacity to store energy. They use these smaller prototypes to assess the safety of various materials used to create the electrical reactions that power the car.

Not all of the innovative work on EVs is being done in large university or corporate labs, though. Next, we'll talk about a few of the small businesses and adventurous enthusiasts experimenting in labs and garages. 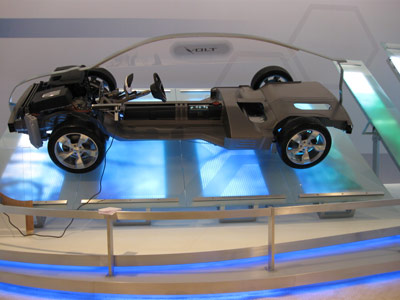 Jim Husted repairs electric forklift engines for a living in his shop in Redmond, Ore. While making his repair rounds, he met John Wayland, who, in his spare time, drag races a Datsun converted to electric power. Wayland showed Husted the two modified forklift engines crammed under the hood of his race car, White Zombie.

Husted thought he could do better, so he went back to his shop and fiddled with engines until he found a solution for Wayland's two-motor problem. He made a few modifications to the equipment and coupled the two motors together end to end. The motors now weighed 25 pounds (11 kg) less and were 7 inches (18 centimeters) shorter, which added up to faster track times for Wayland. The resulting two-motor vehicle was painted purple and dubbed the Siamese 8.

Husted has been experimenting in his shop ever since. He's produced engines for the record-setting KillaCycle electric motorcycle and has restored a 1910 electric motor for a fellow EV enthusiast's century-old horseless carriage project [source: Hi-Torque Electric].

Sometimes, the ingenuity of an entrepreneur and the university lab comes together to create a useful technology. A123Systems, whose lithium-ion batteries have powered record-setting drag strip times for both White Zombie and KillaCycle, used nanotechnologies developed at the Massachusetts Institute of Technology to create its batteries. A123Systems has one of the largest lithium-ion research and development teams in the U.S. Using the Massachusetts Institute of Technology's nanoscale materials in their own labs, the research and development teams developed a battery that can withstand real-world abuses for more than 10 years and still use environmentally friendly technology.

It will be a long time before gasoline-powered cars permanently leave our streets, but labs at all levels are working to bring safe, reliable, fast and fun electric-powered transportation to consumers. Thanks to the innovations birthed at these labs, your next car may be powered by the solar panels on your roof.