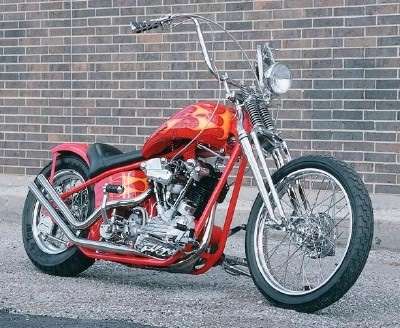 The EL chopper pays homage to the past.

As a prime example of the Old School chopper, Robert Berry's EL shuns the normal sculpted metal, billet trim, and big-inch engine of most customs, relying instead on a bare-bones look and hardware with historical significance.

Chief among these is the engine: a tried-and-true 74-cubic-inch Harley-Davidson Knucklehead, which is all stock save for the turned-up Paughco exhaust system. Granted, the frame is a modern item -- a Paughco with 3-inch downtube stretch -- but the springer forks are very close to those that supported Harleys in the early postwar years.

Of course, this wouldn't be much of a custom without a few nonstock components, but most are anchored in tradition. The fuel tank carries the classic teardrop shape, the rear fender is a cut-down version of the original Harley piece, and the overall look pays homage to 1950s Bobbers. Choppers of the 1960s and 1970s inspired the ape-hanger handlebars, a common item on many great Old School bikes.

Go to the next page for more photos and details of this Harley-Davidson-powered chopper, the EL.For more information on custom choppers and motorcycles, see: 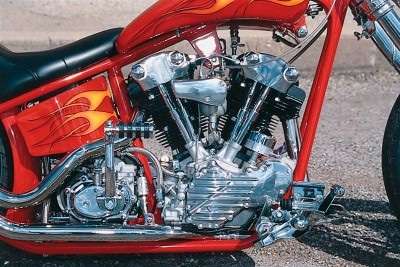 A closer look at the EL's powerful setup.

The EL chopper is a custom Harley-Davidson motorcycle built by Psycle Barn/Rodney Mann/Robert Berry. Below are more pictures and details of this powerful chopper.

You can’t get more classic in the powerplant department than a Harley-Davidson Knucklehead. That’s not Harley’s term for it, by the way; the nickname was coined by riders, because the large bolts on the valve covers look like knuckles on a fist. And in its day, the Knucklehead packed a

Springer forks of this style first appeared on Harleys in the late 1920s. They’ve reappeared on modern versions.

Turned-up exhaust pipes were a fixture on early choppers. The original Harley drum brake may suffice up front, but the rear wheel hosts a modern disc.

The distinct paint job of the EL chopper.

Almost by definition, Old School choppers take the lean and mean approach, with little in the way of fancy trim. Fancy paint, however, is OK.