Eclipse: Profile of a Hot Rod 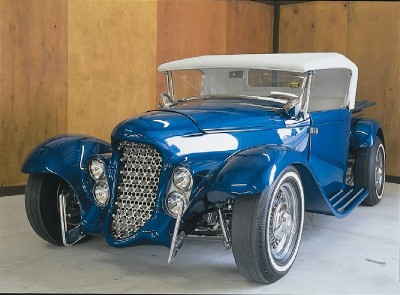 Ray Farhner fashioned the Eclipse, which was based on a 1932 Ford roadster pickup. See more hot rod pictures.

The Eclipse custom hot rod came into existence thanks to Ray Farhner who, in the late 1950s, was a Midwest custom shop owner looking to make a splash. He decided the best way to demonstrate what his shop could do was to build a wild show vehicle that would straddle the line between ­custom and hot rod.

Farhner enlisted young Doug Thompson to design and help build an elaborate show vehicle based on a 1932 Ford roadster pickup. Working from Farhner's Independence, Missouri, shop, the pair put an estimated 4500 man hours and $4400 into a unique pickup that earned Ray Farhner Kustoms accolades as one of the country's top custom shops.

To lower the pickup, Ray channeled the body six inches over the frame, reversed the front spring, and installed a three-inch dropped front axle. A four-inch top chop helped visually and literally lower the truck further.

Practically no body panel of the Eclipse was left unmodified. The grille area was completely fabricated to house quad canted Lucas headlights and a grille made of 1958 Ford grille mesh and '58 Cadillac teeth. Ray and Doug set the headlight pods on either side of the grille and faired them into the hood panels.

Doug's original plans called for a box-shaped bed, but Ray used a pair of modified 1959 Chevy rear quarter panels as the bed sides for a more sculpted look. The duo molded a pair of 1929 Model A fenders (turned backward) into the Chevy quarters, and incorporated a rolled pan with an inset license plate.

The rear fascia was filled with 1958 Cadillac grille teeth and 1959 Caddy taillights, and wraparound bumperettes were set into the pan. At the top of the bed, Doug and Ray grafted in exhaust tubing to house twin antennas, and below that they ran exhaust pipes made from Ford Model A driveshafts.

The bed floor was done in Philippine mahogany, and Ray finished it off with a tonneau cover.

Art West of Kansas City stitched the white Naugahyde upholstery, adding blue buttons and carpeting. The upholstery extended beyond the custom bucket seats to the padded dash, padded step pads on the running boards, and even the bed and engine compartment. West also upholstered the custom top, which featured four-inch overhangs front and rear.

The upholstery of the Eclipse was done by Art West, who used white Naugahyde and blue buttons and carpeting.

A set of 1956 Chrysler wire wheels and 22 coats of Moon­glow Pearl lacquer, a light blue color, completed the exterior.

Ray dubbed the hot rod pickup the Blue Angel and competed at the 1960 NHRA show in Detroit, where it beat out the Ala Kart for best of show. Ray even took the pickup to Oakland to compete in the 1960 Grand National Roadster Show.

Within a couple of years, Ray had changed the paint to a darker shade of blue and the name to Eclipse. At about this time, Ray started his own show series, and the Eclipse became a regular featured custom at Farhner's shows.

Eventually, the Eclipse was relegated to storage until custom collector Jack Walker bought it from Ray in 1979. Ray sold the hot rod pickup with the stipulation that Jack would have Doug Thompson restore it and let Ray use it on his show circuit again. Jack agreed, and Doug set to work on the pickup he had helped create years earlier.

Doug made some changes along the way. He removed the step pads and tonneau cover, made a walnut box for the inside of the bed, and cut a Plexiglas bed floor that would allow a view of the rear end.

He also upgraded the truck with modern components, including a Ford 302-cid V-8, a Jaguar independent rear suspension, a Super Bell front axle, and disc brakes.

Jack leased the Eclipse to Farhner for two years, then took it on his own extended tour that included a trip to Europe and six years at Darryl Starbird's National Rod & Custom Car Hall of Fame Museum in Afton, Oklahoma.

The pickup was restored again in the mid 1990s, and Jack sold it to Mark Moriarity of Mound, Minnesota, in 2005, just weeks after Ray Farhner passed away.