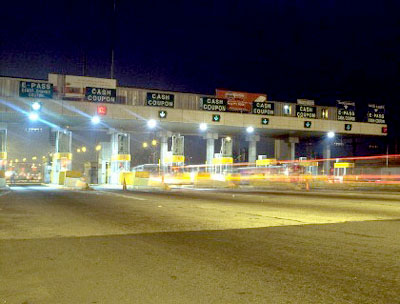 Toll plazas like this one are familiar sites to millions of drivers.
Photo courtesy TransCore Inc.

You never want to be stuck on a toll road without a pocket full of change. It can be a bit nerve-racking to dig through the car seats, trying to find something to give to the toll booth attendant while drivers behind you honk and yell for you to move on. These are the kinds of situations that cause delays at toll plazas.

Today, most toll roads are equipped with an electronic toll-collection system, like E-ZPass, that detects and processes tolls electronically. E-ZPass is used by several U.S. states, but most other electronic toll systems are very similar to E-ZPass. Basically, E-ZPass uses a vehicle-mounted transponder that is activated by an antenna on a toll lane. Your account information is stored in the transponder. The antenna identifies your transponder and reads your account information. The amount of the toll is deducted and you're allowed through.

Electronic toll collection is designed to make traffic flow faster, as cars don't have to stop to make a transaction. In this edition of HowStuffWorks, you will learn how the E-ZPass system tracks vehicles and collects tolls. 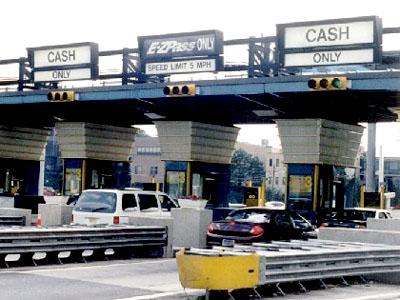 Millions of drivers pass through toll booths every day. Traditionally, the process is to put some change in a basket, which tabulates the coins and opens a gate to allow the driver through. Today, many local and state traffic agencies have installed or are installing electronic readers that allow drivers to pass through toll stations without coming to a complete stop. The names of the systems vary, but they all work in pretty much the same way.

Here are the basic components that make the system work:

Drivers usually have to pay a deposit to obtain a transponder, which is about the size of a deck of cards. This device is placed on the inside of the car's windshield behind the rearview mirror. A transponder is a battery-operated, radio frequency identification (RFID) unit that transmits radio signals. The transponder is a two-way radio with a microprocessor, operating in the 900-MHz band. Stored in this RFID transponder is some basic account information, such as an identification number.

Antennas, or electronic readers, are positioned above each toll lane. These antennas emit radio frequencies that communicate with the transponder. The detection zone of an antenna is typically 6 to 10 feet (2 to 3 m) wide and about 10 feet long. These two devices, the transponder and the antenna, interact to complete the toll transaction.

Some electronic toll-collection systems may also include a light curtain and treadles. A light curtain is just a beam of light that is directed across the lane. When that beam of light is broken, the system knows a car has entered. Treadles are sensor strips embedded in the road that detect the number of axles a vehicle has. A three-axle vehicle is charged a higher toll than a two-axle vehicle. These two devices are safeguards to ensure that all vehicles are counted correctly.

In the next section, you will see how all of these components work together to detect vehicles and collect tolls.

No Change, No Problem

By installing electronic toll-collection systems, government agencies believe that traffic will move faster. The idea is that even if commuters have to slow down for the toll booths, they can get through faster with a system like E-ZPass. Motorists no longer have to worry about stopping to deposit or hand over the toll -- and there is certainly no searching the car for loose change. As long as they've paid on their E-ZPass account, they just have to rely on the lane antenna to read the signals from the transponder.

Here's how the system works:

The entire process takes a matter of seconds to complete. The electronic system records each toll transaction, including the time, date, plaza and toll charge of each vehicle. Typically, consumers maintain prepaid accounts. A yellow light or some other signal will flash to indicate if an account is low or depleted.

The rules regarding how fast you can pass through the toll plaza vary from system to system. Some traffic agencies allow drivers to pass through the system at 55 miles per hour (86 kph). Others want you to slow down to 30 mph (48 kph), or even 5 mph (8 kph).

These lanes are monitored using video cameras. Some states allow cars to drive right through the toll plaza as the antenna detects the transponder. If you try to go through the plaza without a transponder, the camera records you and takes a snapshot of your license plate. The vehicle owner then receives a violation notice in the mail.