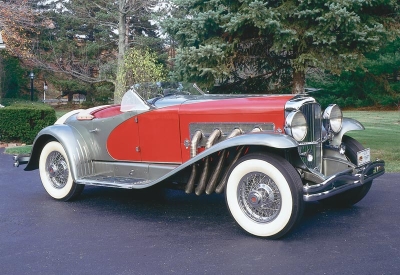 If the J was imposing, the supercharged SJ was awesome. Approximately 36 were built, with chassis priced at a prodigious $11,750. Because the centrifugal blower delivered a six-psi boost at 4,000 rpm, conrods were switched from aluminum alloy to sturdier tube-steel types. SJs developed no less than 320 horsepower, but Augie Duesenberg wanted more, so he half-heartedly tried a set of "ram's horn" manifolds with dual carburetors and was amazed to see 400 horsepower on the dynamometer. Only three cars were fitted with the 400-horse­power engine.

SJ performance is well-documented. A stock example could reach 104 mph in second and top 125. In 1935, the famed Ab Jenkins drove a aerodynamic speedster (later know as the Mormon Meteor) on the Bonneville Salt Flats in Utah for 24 hours at an average speed of 135 mph. Jenkins also ran 152 mph for one full hour and clocked one lap at 160! Naturally, the Mormon Meteor had the "ram's horn" engine. In spite of its speed, the car was still usable on the street. To put it mildly, the SJ was simply incredible.

Yet besides power and luxury, these Duesenbergs had surprising dynamic balance, without the heaviness of so many high-priced contemporaries. Model Js weren't "trucky," did not steer like tanks, and didn't demand huge leg muscles to operate their clutches or brakes. They did understeer, but this was easily checked by exquisitely accurate steering. A wide-open SJ with exhaust cut-out throbbed more than extroverts could endure, but with a closed exhaust cut-out it was little louder than a healthy Cadillac Sixteen.

Only two Model Js came close to being "sports cars," a pair of specials unofficially referred to as SSJ. Both were built by the Cord-owned Central Manufacturing Company, using the La Grande name, on "short" 125-inch wheelbases. Both were first driven by movie stars. The first was owned by Gary Cooper. The second was loaned to Clark Gable as a demonstrator, but was not purchased by Gable. Both cars survive today, though as museum pieces, and there's still no definitive information on their performance. But they must have been shattering, what with relatively lean bodies, 400-horse "ram's horn" engines, and chassis 17 inches shorter than standard.

Another Model J offshoot was the JN -- introduced in 1935. An attempt to give a more-modern look to an aging design, the JN was equipped with smaller 17-inch-diameter wheels (versus 19 inches), skirted fenders, bullet-shaped taillights, and bodies set on the frame rails for a lower look. Supercharged JNs gained the logical SJN designation. But again, confusion reigns. Blowers were later removed from some SJs, while others were added to originally unblown models. At least 45 cars had a supercharger at one time during their lives. Then there's the longtime misconception that any car with pipes snaking out from under its hood has to be supercharged. Duesenberg built cars with beautiful plumbing outside, but it wasn't always connected to a supercharger inside.

Under E.L. Cord, the company wasn't necessarily supposed to make a profit -- just magnificent, cost-no-object cars as the flagships of Cord's industrial empire. The plan was for Duesenberg to sell a lot of 500 cars and come out with a new design. The Depression stretched out the time to sell that 500 cars. Cord's empire collapsed in 1937 before a new design was needed.

Sadly, Fred Duesenberg didn't live that long; he had been killed five years earlier in an auto accident -- ironically, behind the wheel of an SJ. Brother August continued working, but failed with his plan to revive the marque in 1947. Several subsequent revival attempts proved equally fruitless. Among the more notable was a "modern" Duesenberg sedan floated by Fred's son "Fritz" in 1966 and an abortive 1980 Cadillac-based sedan cooked up by two of the brothers' nephews. There have also been numerous postwar replicas of original models ranging from splendid to schlocky.

But none of these efforts had the heart and soul of Fred himself. As the late Ken Purdy, pioneer automotive journalist, once wrote: "[Fred Duesenberg] died content … [He] had done what is given few men to do … chosen a good course and held unswervingly to it … With his mind and his two good hands he created something new and good and, in its way, immortal. And the creator is, when all is said and done, the most fortunate of men."