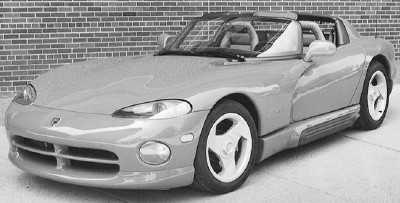 The 1992 Dodge Viper -- especially in red -- was a very popular model for Dodge.

Signaling the start of this product revolution was that stunning 1989 showmobile, the two-seat Viper RT/10 roadster. A stark but potent creature, it was freely created in the image of Carroll Shelby's legendary Cobra. But the real movers behind it were Chrysler president Bob Lutz and chief engineer Francois Castaing, who wanted to show their company was capable of far more than K-cars and minivans.

To no one's surprise, showgoers pleaded for Dodge to make a Viper they could buy. In May 1990, Chrysler said it would oblige them. But more than just an exciting image-booster for Dodge, this low-volume sports car would be the first test for the streamlined "team approach" to vehicle development that Lutz and Castaing wanted to implement companywide. Though the concept car had to be entirely reengineered for production on just $50 million, the showroom Viper was on time and on budget. Sales began in May 1992, just 36 months after project approval, a new record development time for a production MoPar.

If not exactly cheap at $50,000, the Viper cost far less than other contemporary "exotics" -- or a genuine Cobra. Raw power and colossal acceleration were its reasons for being. Though based on a forthcoming truck engine, Viper's unusual new all-aluminum V-10 (hence RT/10) was engineered with assistance from Italy's Lamborghini (then owned by Chrysler). It wasn't a sophisticated mill, what with pushrods working two valves per cylinder, but it was huge: no less than 8.0 liters, a massive 488 cid. The result was a mighty 400 horsepower and 450 pound-feet of torque. With mandatory six-speed manual transmission and standard limited-slip differential, the Viper could rocket from 0 to 60 mph in about 4.5 seconds and rip through the standing quarter-mile in 13.1 seconds at 108 mph.

Unlike other recent Dodges, Viper had conventional rear-wheel drive and classic all-independent double-wishbone suspension. This was, after all, a "pure sport car," as Shelby called such machines, which also meant few concessions to civility. For example, brakes and steering were powered, but nothing else. There were no exterior door handles -- and no windows, either; just clip-in side-curtains. The top was a rudimentary canvas toupee that didn't ward off rain too well. It did, however, trap much of the V-10's prodigious heat, which was noticed even at speed with the top off and the takeout rear window removed. Trunk space? Barely enough for a gym bag. Yet des­pite its stark furnishings and lightweight body panels made of plasticlike materials, the Viper ended up a bit heavier than planned at around 3400 pounds, though that partly reflected a very stiff, separate tubular-steel chassis.

But why sweat the details? The Viper was all about fast fun on sunny days -- not to mention looking great, as the voluptuous show-car styling survived completely intact. That included a nonstructural "sport bar" behind the cockpit and exposed functional side exhaust pipes that were wonderfully "retro" but could fry errant legs and sounded quite odd. Huge disc brakes provided terrific stopping power within handsome tri-spoke 17-inch aluminum wheels. Ultra-wide Z-rated tires helped provide super-sticky cornering, though power-sliding oversteer was ever available with a well-timed slam on the hammer. Yet unlike the scary Cobra, the Viper was easy to drive fast and well.

A lot more people wanted Vipers than Dodge could build -- which was exactly how Chrysler wanted it. The exoticar market was notoriously fickle, so why build too many Vipers too soon and risk depressing resale values? Production was slow to start anyway. Seeking top-notch quality for the costliest Dodge ever, Chrysler retooled its Detroit New Mack Avenue plant for turning out Vipers only as needed, which meant mostly by hand. Still, initial quality was somewhat less than world-class, and only 162 Vipers were built as '92 models, all painted bright red. But teething troubles couldn't dim the Viper's luster or the public's lust for Viper.

Viper roared into 1993 with only two changes: black as a second color choice and available dealer-installed air conditioning. Though some 3000 cars were planned that model year, unexpected molding troubles with the big one-piece front end held actual volume to about 1000. But the problems were soon fixed, and '94 production nearly tripled to 2892. Full factory air became optional that year, the transmission got an electric reverse-gear lockout, and color choices expanded to yellow and Emerald Green. The '95 was unchanged except for price, which Chrysler reluctantly raised by a relatively modest $1500.

A Viper paced the 1991 Indy 500, with Carroll Shelby himself driving the prerace parade lap. Though sales were still a year off, Dodge's new hot rod hardly needed this publicity, as "buff" magazines were breathlessly reporting every facet of its show car-to-showroom progress. And in fact, Viper wasn't the first choice. Dodge had bought pace-car privileges to promote its new '91 Stealth, an upscale V-6 sports coupe available with all-wheel drive and up to 300 turbocharged horses. But aside from styling, the Stealth was a Mitsubishi design built in Japan, and a Japanese pace car just wasn't "politically correct" for the premier American race. Dodge relented, prepared a Viper prototype to fill in, and relegated Stealths to the background.