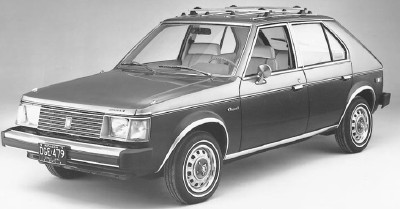 The ultra-reliable Dodge Dart remained a sales winner right to the end (mostly on the strength of workaday sedans), but its 1976 replacement called The Aspen was a letdown. In essence it was a slightly larger, roomier and heavier Dart, offering a wider range of luxury options -- much like the Granada was to Maverick at Ford.

Unfortunately, Aspen soon earned the dubious distinction of being the most-recalled car in history (along with its Volare twin at Plymouth), due to poor workmanship in general and early body rust in particular. (GM's X-cars soon wrested that sorry title.) But performance was good with the extra-cost 360-cid V-8 listed through '79, and furnishings were nicer than on most Darts. Aspen also revived a compact Dodge wagon, something Dart had lacked since its '67 redesign. There were ­pseudo-muscle R/T coupes and even a "finish it yourself" 1979 kit-car racer.

Despite its problems, Aspen was important for Dodge sales in the late '70s. It also exemplified one of the few things Detroit began doing well: putting big-car comfort in smaller packages (here, 108.7-inch-wheelbase coupes, 112.7-inch sedans and wagons). Aspen was advertised as the "family car of the future," which was hyperbole worthy of P.T. Barnum, but it would lead to the genuine article.

An unusual Aspen (and Volare) feature was its front suspension, which had torsion bars per Chrysler tradition, but situated crosswise instead of lengthwise. Some critics sneered that this was contrived merely so Chrysler could still advertise front torsion bars -- and that it had no real advantage for ride or quietness; a few even claimed it actually hampered handling. Regardless, the transverse bars did allow for better suspension isolation, which made for smoother going than in the Dart. Aspen's mainstay engines, 225 Slant Six and 318 V-8, were by now hoary affairs, but proven. And the thrifty six (which could yield up to 25 mpg on the highway with manual shift) was about as bulletproof as Detroit engines ever got.

If Aspen didn't realize its sales potential, the larger Dodges fared even worse. The midsize Coronet/Monaco became more like the equivalent Plymouth Satellite/Fury with each passing year (all were built nose-to-tail at Chrysler's Lynch Road plant in Detroit) and was hardly a bargain at prices averaging $100 higher. It was also thirsty, and styling was forgettable. The Charger was simply watered down amidst name shuffles. For 1975 it became a twin to Chrysler's posh Cordoba, a car even the Dukes of Hazzard wouldn't have recognized.

This midsize generation began with fuselage-style '71 Charger coupes on a 115-inch wheelbase and 117-inch Coronet sedans and wagons. By 1978, they'd been heavily face-lifted once -- for '75 -- and trimmed to Charger SE and Magnum XE coupes, plus assorted Monacos and Monaco Broughams.

The reason for thinning those ranks was Diplomat. Launched for 1977, it was much like Chrysler's new LeBaron: a reskinned Aspen/Volare platform with coupes, sedans, and wagons on a 112.7-inch wheelbase. Diplomat sold well from the start, and its more sensible design made the old-style intermediates unnecessary. The Coronet-turned-Monaco was thus transformed after 1978 into the St. Regis, all but identical with Chrysler's "down-sized" R-body Newport/New Yorker sedan. The Cordoba-like Charger vanished at the same time; the related Magnum hung on through '79.

Then the smooth Mirada took over as the personal-luxury Dodge. Mounting the Diplomat platform, it was a close cousin of 1980's new second-generation Chrysler Cordoba. One of the few true hardtop coupes left by that time, it bore a striking front end recalling the "coffin nose" of the late-'30s Cord 810/812 -- and the previous Magnum. Good looks won Mirada a lot of good copy in "buff" magazines. And considering how things had changed since the muscle-car days, it was decent­ly quick -- if you ordered the optional 185-bhp 360-cid V-8, Dodge's hairiest engine that year. Unhappily, this was another one that was just a shade too late to be of any real value, and Mirada's annual production averaged less than 7500 units through swan-song 1983.

Capping Dodge's enforced product renewal in the '70s was the L-body Omni, a sensible, front-drive subcompact announced for 1978. It was cut from the trend-setting pattern of the Volkswagen Rabbit, and was even powered at first by a slightly larger version of VW's single-overhead-cam four (also mounted transversely). Omni wasn't quite as much fun to drive, but had the same boxy, four-door hatchback styling and high practicality. Along with Plymouth's near-identical Horizon, Omni was one versus 99.2). Called 024, it won an immediate following, even managing a few conquest sales among import buyers seeking a sporty and nimble 2+2 that was easy on the pocketbook.