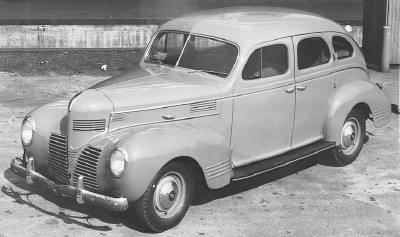 Dodge styling in the 1930s was the most conservative of any Chrysler make, and the division was lucky to escape being saddled with an Airflow, as was planned for 1935. Dodge's long-famous ram hood mascot, a manifestation of the Chrysler takeover, arrived in '32. Lines were four-square through 1934 save a slight concession to the "streamlining" craze in a rakish 1933-34 grille. Then came a waterfall grille, skirted fenders, and much-more-rounded lines as part of the companywide "Airstream" look adopted for 1935-36. By 1939, Dodges had acquired extended "pontoon" fenders, elongated rear decks, and a sharp "prow-front" under the direction of company design chief Ray Dietrich, thus falling nicely in line with DeSoto and Chrysler.

Like most makes, and the Depression notwithstanding, Dodge cataloged numerous body types throughout the '30s, including all the popular open styles. Among the latter was a convertible sedan, which was absent for 1935 and then vanished after '38 due to diminishing sales. A long 128-inch-wheelbase chassis appeared for 1936 under seven-passenger sedans and limousines; by 1939 this was up to 134 inches. Dodge also made a strong effort to win custom-body business by selling chassis to hearse, ambulance and station wagon builders.

Like other Chrysler products, the '39 Dodges were totally redesigned -- fitting for the make's Silver Anniversary year. Also in evident celebration, the division returned to a two-series lineup for the first time since 1934: Special and DeLuxe, differing mainly in interior trim. DeLuxe also offered more models. Long sedans took a year off, but not the sturdy Dodge six: still pumping out 87 horsepower, as it had since '34. A "birthday present" of sorts was a limited-edition five-passenger DeLuxe Town Coupe with Hayes bodywork on the standard 117-inch wheelbase. Hayes built 1000 of these pretty, thin-pillared bodies for use among Dodge, DeSoto, and Chrysler. The Dodge version saw 363 copies of the one-year-only model, and led the "Luxury Liners" in glamour as well as price ($1,055).