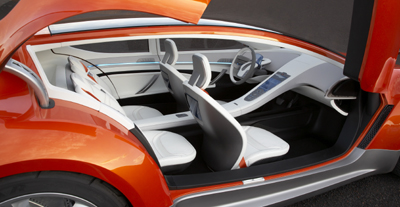 Introduced at the 2008 Detroit Auto Show, ZEO was built for a customer base Dodge refers to as environmentally-conscious driving enthusiasts with a need for speed. The all-aluminum coupe rides on 23-inch wheels, has a distinctive LED-lit grille, LED-trimmed cabin and scissor-style doors. With a claimed 250 horsepower on tap, Dodge projects a sub-six second 0-60 mph time. 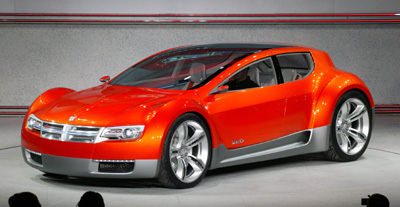 Though less ambitious technically, ZEO's drivetrain relies on the same breakthrough in battery technology as Chevrolet's Volt concept: lithium ion. Introduced at the 2007 Detroit Auto Show, Volt features a plug-in hybrid drivetrain that relies heavily on lithium-ion technology. Lithium-ion batteries can currently be found in portable electronic devices like laptop computers, but have proven unreliable in harsh, extreme temperature environment conditions like those under the hood of a car.

The 2+2 sport coupe rides on a 109.9-inch wheelbase. It measures in at 172.8 inches long, 68.6 inches wide, and 50.8 inches high. Although Dodge has no plans for a production-model ZEO, it claimed the public will see shades of the concept in the design of future products.