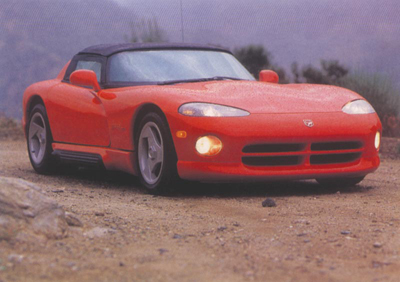 The Viper is a parade all by itself. It rolls by like a break in the routine, a celebrity glimpsed in the flesh, a brassy "Stars and Stripes Forever." Folks nudge and point. Whooping kids pedal their bikes like mad, trying to keep up. Heads turn and trace the car's passage into the distance. In its wake a void is created, the street no longer a stage.

The spectacle lasts longer from behind the wheel.

A turn of the key ignites eight liters of aluminum V-10. Exhaust pipes bark just below your elbow. Engage the clutch. Prod the accelerator. At just 1200 rpm there are 400 pounds/feet of torque at your command. It pours forth like water over Niagara Falls.

Reverberations from the side pipes send roosting birds heavenward. The massive hood quivers, the steering wheel comes to life. Wind tattoos your scalp. Dig deeper into the throttle. Aim down the straight. Get on the brakes. Bend the Viper into a turn. Feel the tires bite. Accelerate out of the corner. Your eyes are barely three feet above the pavement rushing by. A vortex of dust and leaves swirls from the tail. Shift! Accelerate! Do it again.

The show car's cockpit was all-business. Access to the pedals would be improved for production.
Chrysler LLC

Cars like this are rare. And cars like this from an American automaker are almost unheard of. But Chrysler has one in the Viper. And it's no accident.

From its inception, Viper's mission was to resurrect the excitement of the very boldest of sports cars, the fabled AC Shelby Cobra 427. It is, in fact, Cobra-like in conception -- a pure two seater with rear-wheel drive and big-cube power -- and in detail -- side curtains instead of roll-up windows, and no exterior door handles.

At the same time it is amassing the lore that is essential to making cars like the Cobra larger than life.

The Viper saga began in early 1988, as some of Chrysler Corporation's top decision makers, who also happen to be car guys, turned to the notion of building a new car with the spirit of the original 1965-1967 Cobra.

Within Chrysler's ranks an elite commando unit of car engineers and designers was formed. Equipment was "borrowed," space "procured." This group produced a running prototype in just 11 months.

Lee Iacocca himself is said to have authorized production of the Viper after an awesome test blast down a suburban Detroit street.

And when Chrysler stumbled into a public-relations briar patch by announcing that the Japanese-built Dodge Stealth would pace the 1991 Indianapolis 500, it was Viper that raced to the rescue. Another prototype was hurriedly produced and pressed into pace-car service. At the wheel was the man behind the legend, Carroll Shelby, who just months before had undergone a heart transplant. Shelby was the father of the Cobra, and a driving force in the development of the Viper.

When the first half-dozen of the 200 1992 production models rolled into Southern California showrooms in May, they caused a sensation. Ecstatic Dodge dealers accepted orders at triple the $50,000 list price. Others said their Viper was not for sale at any price -- it was too valuable a drawing card. 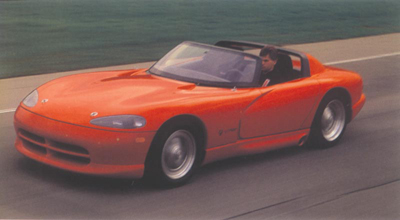