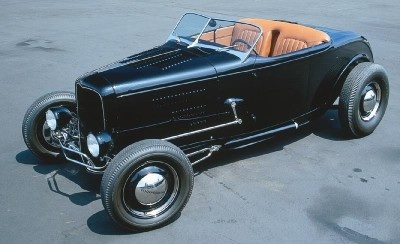 The Doane Spencer Deuce was born from the modifications of Doane Spencer and Jack Dorn, two classmates at Hollywood High in the early 1940s. In 1941, Dorn bought a maroon 1932 Ford roadster that he painted black and modi­fied by filling the grille shell, installing a stock 1937 Ford flathead V-8, and adding a DuVall windshield (compliments of Spencer).

Spencer acquired the car in 1944 for $500 and turned it into one of the most significant hot rods ever built. A self-taught mechanical genius, Spencer lived on the edge of hot rod trends and technology. He removed the fenders and installed a 258-cid 1946 Mercury flathead V-8 with Ord heads and an Ord twin-carb log manifold.

With details like the engine-turned dash, hand-rolled gas-tank cover, and fold-down armrest, the car won the Best Appearing Roadster award at the Pasadena Roadster Club's 1947 Reliability Run and was invited to be displayed at the first SCTA Hot Rod Show in 1948.

Although beautiful, the Deuce was driven hard. Spencer raced his highboy at the El Mirage dry lake and drove it extensively, taking it through 42 states. At El Mirage, it ran 112.35 mph in 1947 with the 258-cid flathead. Spencer destroked the engine to 243 cubes in 1949, and ran 126.76 mph -- impressive for a street-driven roadster.

The Doane Spencer Deuce had the looks of a street roadster, but the hot rod's V-8 engine raced up to speeds of 126.76 mph at the El Mirage dry lake.

In the early 1950s, Spencer began to rebuild the roadster so he could run it in Mexico's Carrera Panamericana. He beefed up the suspension, ran the exhaust through the frame rails, and installed a Halibrand quick-change rear end, Hali­brand magnesium wheels, and a new Lincoln overhead-valve V-8. Unfortunately, the Mexican road race was canceled before he could run it, so Spencer sold the car to Rod & Custom staffer Lynn Wineland.

Wineland modified the car further with a Ford Thunderbird V-8, a 1937 Ford tube axle, and rear radius rods. Spencer, in fact, performed some of the work. Wineland never com­pleted the car, however, and sold it to fellow R&C staffer Neal East in 1968. East put the car back on the road with the flathead V-8 and a 1948 Lincoln overdrive transmission.

East had the chassis and body freshened in 1985, and owned it until 1995 when he sold it to collector Bruce Meyer, who had Pete Chapouris and his crew restore the car to show condition back to its most famous form.

In 1997, the legendary Doane Spencer Deuce was invited to appear in the first ever Hot Rod class at the Pebble Beach Concours d'Elegance. Like it had so many times before, it won first place.

Since then, Bruce has included the Deuce with a handful of other historic hot rods in the ongoing Bruce Meyer Hot Rod Gallery at the Petersen Automotive Museum in Los Angeles.