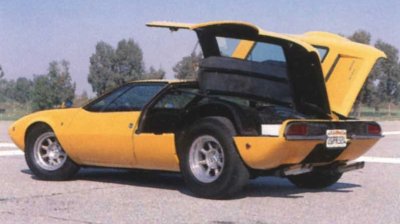 Low and dramatic, the first successful roadgoing DeTomaso was penned by Giorgio Giugiaro, then of the Ghia studios. Doors were conventional, but a gullwing-style engine cover made the DeTomaso Mangusta unique.

Alejandro de Tomaso was an Argentinian race-car driver who emigrated to Italy to build competition machines after first settling in the United States, where he married and continued racing for a rime (with his wife). In the 1970s he built DeTomaso Automobili into a small power in the motor industry of his adopted country. Today it owns Maserati and Innocent!, and also builds DeTomaso cars, as well as Benelli and Moto Guzzi motorcycles.

But in the early Sixties, Alejandro was struggling to make the shift from race-car constructor to road-car manufacturer, producing prototypes that always seemed to have a lot of potential but no future. Accordingly, no one took much notice when he revealed a Ford-powered mid-engine coupe in November 1966. Yet this car, the DeTomaso Mangusta, would become his first series-production model, thus laying the foundation for DeTomaso’s future mini auto empire.

The DeTomaso Mangusta (“mongoose” in Italian) wasn’t Alejandro’s first roadgoing sports car. That was the Vallelunga, which appeared in 1964. A smallish open two-seater, it featured a novel “backbone” chassis with all-independent A-arm suspension and a midships-mounted 1.5-liter British Ford four-cylinder engine. Alejandro hoped to sell copies or at least interest a major automaker in production rights, but could do neither.

Then, a turning point. In 1965, DeTomaso persuaded young Giorgio Giugiaro, formerly of Bertone but then working at the house of Ghia, to design a dosed body for the Vallelunga chassis. It attracted attention and Ghia built a few prototypes, only to discover that lack of chassis rigidity around the drivetrain created insoluble vibration problems. This left the Vallelunga stillborn but Alejandro with a valuable contact.

It didn’t take long to pay off. Determined to make his chassis work, DeTomaso decided to try a scaled-up version with a small-block V-8 from Ford Dearborn. American racing specialist Pete Brock designed an open competition body for it with an eye to the 1966 Sebring 12 Hours, but the car never made it to Florida. Again thwarted but still undaunted, Alejandro turned to Ghia for a show car based on this “big” chassis.

Meantime, Giotto Bizzarrini (whose name crops up in connection with Ferrari, Iso, and Lamborghini) had just designed a mid-engine chassis of his own, for which Giugiaro had created shapely coachwork of elegant simplicity. This proposed P538 “Bizzarrini” was never built, but Giugiaro’s styling was applied to DeTomaso’s show car, essentially the DeTomaso Mangusta prototype.

First displayed at the 1966 Turin Show as the Ghia Mangusta, the result was stunning: wide and wickedly sleek, low to the ground, sexy and sophisticated. Happily, nary a line was changed for production. Highlights included a simple grille with two or four headlamps (depending on country of sale), a very wide hood, big cast-alloy wheels hulking beneath aggressively flared fenders, and a fastback tail with a distinctive dorsal rib on which twin engine access covers were hinged gullwing-style.

The DeTomaso Mangusta chassis was a classic example of the mid-engine layout then sweeping the competition scene. The powerful 289-cubic-inch Ford engine, tuned as for the new Shelby-Mustang GT-350, sat longitudinally behind a rather cramped two-seat cockpit and ahead of the rear-wheel centerline, driving through a ZF 5-speed transaxle of the type found in such cars as the Ford GT40 endurance racers. The chassis was still DeTomaso’s pressed-steel backbone affair, with box-section and tubular superstructures carrying engine/transaxle, suspension, steering, and seat mounts.

Some say that this design was influenced by that of Mickey Thompson’s unsuccessful 1964 Indy race car, others that Alejandro had merely mimicked Colin Chapman’s Lotus Elan chassis. Regardless, the DeTomaso Mangusta’s backbone platform was too flexible for the muscular V-8, and the resulting erratic suspension geometry made handling unpredictable. A rearward weight bias -- no less than 68 percent -- hardly helped.

Later, at the suggestion of consultant Gian Paolo Dallara, the talented Lamborghini engineer, DeTomaso tried to compensate by fitting much wider rear tires (225-section versus 185 front), but it wasn’t enough. Ground clearance was very limited and roll center low, but the chassis flex gave the DeTomaso Mangusta a mind of its own: sometimes it understeered, sometimes it oversteered. Needless to say, high-speed driving could be tricky business, especially on slippery surfaces.

Ford thought about a badge-engineered Shelby version of the DeTomaso Mangusta to replace the original Cobra, but it came to nothing.

Not that this was any great surprise for what was essentially a detuned race car. Which brings up the DeTomaso Mangusta’s other chief failing: lack of practicality. Even for a high-performance GT, it didn’t have nearly enough passenger and luggage space, and outward vision was difficult, especially astern. What it did have, of course, was speed aplenty -- DeTomaso claimed a 155-mph maximum -- plus that gorgeous Giugiaro body and, thanks to the low-cost proprietary drivetrain, a reasonable price: $11,500.

Flawed though it was, the DeTomaso Mangusta was a car Alejandro could sell. His wife gave him the means. Her brother, as it happened, was a director in the American firm of Rowan Controls, and she persuaded him to have Rowan buy not only the DeTomaso factory but Ghia as well. Alejandro soon had 300 orders in hand, and the DeTomaso Mangusta went into production during 1967. By 1971, another 100 or so had been sold in Europe. DeTomaso was on his way at last.

To learn more about DeTomaso and other sports cars, see: