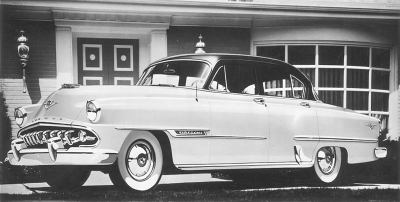 The '49 DeSotos arrived in March of that year after a brief run of old-style cars to fill the gap. Among them were some interesting new utility models. Besides a $2959 woody wagon, the DeLuxe line included the all-steel Carry-All, similar to the Custom Suburban but on the standard wheelbase. It was also quite a bit cheaper at $2191.

The Suburban itself returned at $3179, up over $500 from '48 (postwar inflation was affecting car prices all over). As before, the Suburban shared the long chassis with an eight-passenger Custom sedan (but not the limo, which was dropped), and offered vast cargo space, roof-top luggage rack, plus rear jump seats giving true nine-passenger capacity.

Overall, 1949 was a less-than-spectacular DeSoto year. Volume remained at the '48 level -- about 92,500 -- and the make again finished 12th. However, Customs outsold DeLuxes by 3-to-1, a sign of growing buyer preference for greater luxury.

The 1950 line arrived with somewhat sleeker rear ends and two new models. DeSoto bowed its first hardtop coupe, the Custom Sportsman, at $2489, and moved the DeLuxe woody wagon up to Custom trim before replacing it with a slightly cheaper all-steel model at midyear. Despite the relative lack of change, model-year production leaped to nearly 134,000 for 1950, a gain of almost 45 percent.

Styling was touched up again for '51, when the venerable L-head six was stroked to 250.6 cid, though that yielded only four extra horses. Chrome was very evident, perhaps more than on any other Chrysler line, especially in those toothy fronts.

Production eased to 106,000, dropping DeSoto from 12th to 15th, as Kaiser sailed past with its beautiful new '51 design and Hudson did the same with its powerful new six-cylinder Hornets. Government-ordered production cutbacks for the Korean War also played a part.

DeSoto's big event for 1952 was its first-ever V-8. Called "FireDome," it was an overhead-valve hemi-head design -- a smaller, 276.1-cid version of the brilliant Chrysler 331 in­troduced the previous year. Packing 160 horsepower, it put DeSoto firmly in Detroit's escalating "horsepower race."

The FireDome powered a new like-named top-of-the-line 1952 series that duplicated Custom offerings save the Suburban. Though it immediately garnered nearly 50,000 sales, DeSoto as a whole could do no better than 88,000 for the model year. However, it rose a bit in the production ranks, finishing 13th.

For 1953, remaining Custom/DeLuxe models were combined into a new Powermaster Six series that still lagged behind FireDome in sales, this time by a margin of 2-1. Both lines included Sportsman hardtops.

The growing influence of newly recruited styling chief Virgil Exner was evident in an update of DeSoto's more-massive '52 look, with new one-piece windshields and more-liberal chrome accents. Model-year volume jumped back to 130,000 and DeSoto moved up to 11th, its best finish since banner '41.