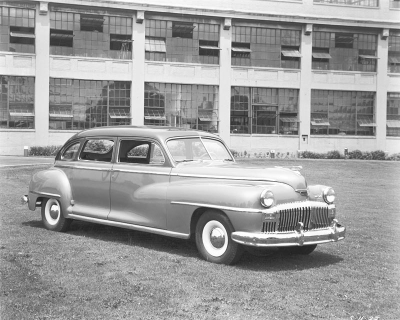 The 1946 DeSoto Suburban was designed to move people and luggage in style.

For 1940 came more-attractive Dietrich styling abetted by longer wheelbases of 122.5 inches standard, 139.5 extended. Chrysler's Fluid Drive, which allowed the driver to start and stop without using the clutch, became available on DeSotos.

The Custom convertible coupe was reinstated, but not the convertible sedan. Though model-year output rose some 11,000 units, DeSoto again placed 13th. Like other Chrysler makes, it might have done better had the firm not suffered a crippling strike at the start of 1940 production.

Volume soared for '41, jumping from 65,500 to over 97,000 and moving DeSoto up to tenth -- its best placing ever. Much of this success was owed to a heavy facelift that made for good-looking cars with lower hoods and bolder fronts. Grilles smiled with the prominent vertical "teeth" that would remain a DeSoto hallmark through 1955.

Standard-chassis models lost an inch in wheelbase but measured 5.5 inches longer overall than the '40s; they were lower and wider, too. There was a new model: the Custom Town Sedan, a formal but pretty adaptation of the standard issue with closed or "blind" rear-roof quarters, priced about $50 higher. DeSoto wooed buyers with numerous extras including underseat heater, pushbutton radio, and streamlined fender skirts.

A more-extensive restyle for 1942 introduced "Airfoil" hidden headlamps that were "out of sight, except at night." Though not an industry first (the 1936-37 Cord 810/812 had something similar), they were Detroit's only hidden lamps that year, and imparted a cleaner look. Emphasizing them was a grille placed entirely on the lower half of the car's "face." A sculpted lady was introduced as a hood mascot.

Model choices held firm for '42, but there was a "squarer" six, bored out to 236.6 cid. Somewhat detuned and rated at 115 horsepower, it would continue through the rest of the decade. There wasn't much time for specials in that war-shortened model year, but DeSoto managed a plush Custom Town Sedan called "Fifth Avenue" (a name much later resurrected at Chrysler).

Identified outside only by small nameplates and inside by luxurious leather and Bedford cloth trim, it sold for about $75 more than the regular Town Sedan. Production was low everywhere in Detroit for '42, and DeSoto was no exception at less than 25,000 -- fewer than 1000 of some individual models.

DeSoto returned to civilian sales with an abbreviated 1946 line, though drivetrain and chassis combinations were the same as '42. Cancelation of the long-wheelbase DeLuxe sedan left only three extended-chassis models, all Customs: limousine, seven-seat sedan, and an intriguing newcomer called Suburban.

The last was designed for the ultimate in stylish hauling for hotels, airports, and well-heeled individuals. A fold-down rear seat sans trunk partition made for a huge cargo hold. Completing the package was a metal-and-wood roof rack. Not surprisingly, the Suburban was the costliest '46 DeSoto at $2093, a healthy $200 above the seven-seat sedan.

As with all Chrysler makes, the 1947-48 DeSotos were largely the same as the '46s; serial numbers are the only guide to model years. All wore a mild facelift of prewar styling with headlamps reexposed, fenders extended back into the front doors, a wider and heavier-looking grille, and reshuffled medallions and parking lights. Rated horsepower was 109, down six from '42, though this reflected a new rating method, not mechanical changes.

Besides "civilian" cars, DeSoto built 11,600 taxicabs in these years -- its fifth best-selling model. Suburban production was also quite satisfactory: 7500 for the period.

DeSoto was fully redesigned for '49, as were other Chrysler makes that year. Standard wheelbase was four inches longer at 125.5, but boxy, upright styling hid the fact. This was typical of Chrysler's new postwar look, which was very dull compared to Ford's and GM's.

A vertical-bar grille was retained, similar to the 1942-48 design, but the lady mascot was replaced by a bust of Hernando DeSoto. Like any "proper" hood ornament of the time, it glowed when the parking lamps or headlights were on. Horsepower rose by three, to 112. Fluid Drive with "Tip-Toe" semiautomatic shift became standard on Customs and a $121 option for DeLuxes.