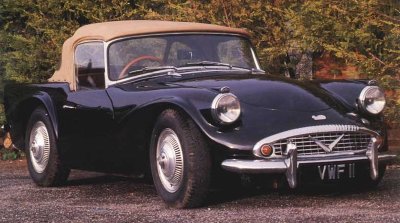 Daimler of England was born more than 90 years ago as an offshoot of the German company that survives today as Daimler-Benz. Yet in all that rime it has rarely attempted sporting cars, and then only in tiny numbers. The Daimler SP250 was the firm's second such effort in the postwar years (after the mid-Fifties Conquest convertible) and far more successful. But it was also something of a fluke, quite out of character with other Daimlers of the day.

Owned by the BSA group for many years, Daimler in the late Fifties was still mainly a "carriage trade" builder of staid, expensive sedans and limousines. But then BSA inexplicably changed Daimler's new-model strategy and its management, a shakeup that would have far-reaching implications. Jack Sangster became chairman, and Edward Turner, famed designer of BSA motorcycles, was drafted to develop new powerplants. The result was a brace of V-8s and plans for a new two-seater.

As a relative stranger to the field, Daimler looked at existing sports cars, being careful not to copy any one too much. Ultimately, the design team settled on a separate chassis topped by a Corvette-style fiberglass body and powered by the smaller, 2.5-liter version of their new V-8.

Design and testing proceeded through 1958, followed by a somewhat premature introduction at the New York Auto Show in March 1959 as the "Dart." As Dodge was already using that name and objected, Daimler adopted the prosaic title "Sports 250" (later just SP250, reflecting engine displacement in cubic centimeters divided by 10). Production was underway before the end of the year, making this a high-speed achievement for such a small automaker, if tarnished by mediocre workmanship on early examples.

Chassis and suspension design (including some components) were lifted from Triumph's contemporary TR3A, which also inspired the 4-speed gearbox. (Daimler hadn't built a manual transmission of its own for some 30 years by that time, and it needed a "blueprint" from somewhere.)Borg-Warner automatic became optional in 1961.

The V-8 was far more original. Patterned after one of Turner's more recent motorcycle engines, it featured hemispherical combustion chambers and opposed valves with complex overhead actuation. Output was 140 horsepower, which looked right and, by all accounts, was.

The styling wasn't -- gimmicky and loaded with period clichés. A wide-grin oval grille bearing a prominent "V" announced a droopy, MGA-style nose with headlamps rather awkwardly thrust out from the front fenders. The windshield was a semi-wrapped affair, and the tail bore trendy fins a la the recently announced Sunbeam Alpine. At least the Daimler had wind-up windows at a time when other British sports cars were still making do with clumsy side curtains, and a rigid lift-off hardtop was available to supplement the folding fabric roof.

Sales started in early 1960 and were quite shaky. Blessed with a good power-to-weight ratio, the Daimler SP250 was fast (up to 122 mph all out), but it handled with the same skittishness as the TR3A it copied, and body flex was so extreme on early examples that doors sometimes flew open without warning in vigorous cornering. So though sufficiently rapid to be selected by several British police departments for pursuit duty, the Daimler SP250 was not likely to approach TR3A or Austin-Healey 3000 sales, a realization that became obvious within the first few months.

Not that it would matter much. In June 1960, BSA sold Daimler to Sir William Lyons and Jaguar, which quickly began reorganizing the combined businesses with the aim of building more Jaguars. Then too, Jaguar was getting ready to bow its sensational new E-Type, which considerably dimmed the Daimler's long-term prospects.

Still, Jaguar tried hard to improve the Daimler SP250. In fact, the car was effectively reintroduced in April 1961 with what became known as the "B-Specification," which entailed a much stiffer bodyshell and standard front and rear bumpers. More body improvements followed in 1963 for a "C-Specification" model. But nothing seemed able to counter those initial quality horror stories, and the Daimler SP250 was unceremoniously dropped in mid-1964 after fewer than 2700 units. Needless to say, there was no successor.

To learn more about Daimler and other sports cars, see: