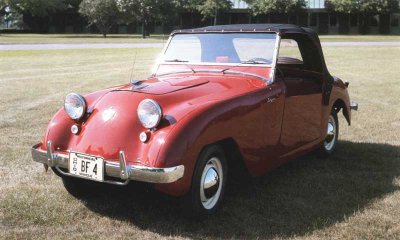 Name script aside, the Super Sports differed from the Crosley Hot Shot in having doors. Both cars were as tiny and spartan as Crosley's passenger cars, but lighter and faster.

Cincinnati radio-and-refrigerator magnate Powel Crosley, Jr., creator of the Crosley Hot Shot, entered the car business in 1939 with dreams of an American Volkswagen: a small, cheap economy model that would make every family a two-car family. Prewar Crosleys were cute but crude little boxes with two-cylinder engines, mechanical brakes, very basic equipment, and prices as low as $299. Powel even sold them in his appliance stores as well as through auto dealerships.

Postwar Crosleys tried to be more like "real" cars: 28 inches longer, more impressively styled, somewhat better equipped (but not much), and more powerful, with an overhead-cam four derived from the copper-brazed "CoBra" unit that had been developed for wartime helicopters and was made of sheetmetal. Despite this engine's near-predictable durability problems, Crosley did relatively well in the postwar seller's market, building some 5000 cars for 1946 and over 19,000 for '47.

In a burst of optimism, Powel Crosley predicted annual sales would soon reach 80,000. Production did climb for 1948 -- to 28,374 units -- but would go no higher. The very next year, Crosley volume plunged nearly 75 percent in the face of a sated market and new models from larger, more prosperous rivals.

Seeking salvation, Crosley turned to more specialized products in 1949. First came the versatile "FarmORoad" utility, followed by, of all things, a sports car. Aptly named the Crosley Hot Shot, this bare-bones two-seat roadster spanned a four-inch-longer wheelbase than Crosley's other cars but shared their drivetrain and chassis. What made it interesting was a racy, uniquely styled body featuring cut-away sides, a bulbous nose flanked by freestanding headlamps, and a spare tire jauntily carried on a stubby, trunkless tail.

Though blessed with only 26 horses, the Crosley Hot Shot lived up to its name with surprisingly good performance, due largely to its bantamweight build and sparse equipment. It was no race car in stock tune but, all things considered, it was a good goer. The typical example could do 0-60 mph in 20 seconds, the standing quarter-mile in 25 seconds at 66 mph, and 77 mph top. Being a Crosley, it was dirt cheap: just $849. The scarcely quicker MG-TC sold for twice as much.

By this time, Crosley had abandoned the trouble-prone CoBra engine for a sturdier CIBA (Cast-Iron Block Assembly) version. With five main bearings, full-pressure lubrication, and a safe 10,000-rpm limit, it looked a natural for souping up. Accessory houses soon obliged with a slew of low-cost bolt-ons that halved the stock model's 0-60 mph time and upped top speed to a genuine 100 mph.

Braje, for instance, listed a full-race cam for $25, headers for $28, and dual manifolds with Amal motorcycle carburetors for $60. Vertex and H&C sold high-performance ignition systems, and S.CO.T offered a Roots-type supercharger that more than doubled horsepower. Happily, the CIBA engine was well up to such muscle-building.

So was the Crosley Hot Shot chassis, which delivered nimble handling and leech-like roadholding despite primitive suspension. Brakes were another story. All 1949-50 Crosleys used aircraft-derived Goodyear-Hawley "spot" discs in front. They resisted fade but lacked proper sealing, and thus often froze when exposed to salt or road grime. A switch to all-round Bendix drums for 1951-52 solved the problem, and were more than a match for even a modified Hot Shot's performance.

Which could be formidable. The Crosley's finest hour came in 1950 when one of that year's new Super Sports, basically a Crosley Hot Shot with accessory doors, won the Index of Performance at the inaugural Sebring 12-hour race. A similar car entered by American sportsman Briggs Cunningham might have repeated the feat at the prestigious Le Mans 24 Hours in '51, but retired with electrical problems.

Crosley itself retired at the end of 1952, a victim of plummeting sales in a "bigger is better" market. The Crosley Hot Shot was up to $952 by then, while the Super Sports had risen from an initial $925 to $1029. Still, these were astonishingly low prices considering the cars' performance potential and high "fun quotient." They should have sold like hotcakes. And they might have had they been built by one of the Big Three.

But they didn't and they weren't, which probably explains why these remain America's "forgotten" early-postwar sports cars. Too bad. They were appealing little giant-killers fully worthy of the term. Come to that, they still are.

To learn more about Crosley and other sports cars, see: