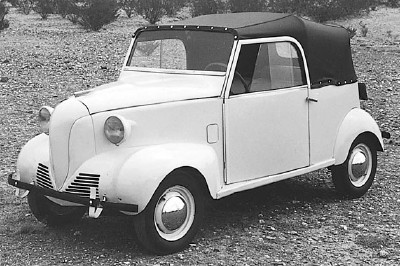 The 1939 Crosley convertible was one of only two Crosley models that year.

Powel Crosley, Jr., built one crude small car while a teenager at the turn of the century, then became a radio and refrigerator magnate in the '20s and '30s. But cars remained his first love, and in 1939 he entered the auto business in a big way with a very small product.

Dreaming of an American "volkswagen," he offered a tiny 80-inch-wheelbase two-cylinder job at the lowest price in the land: $325-$350. Measuring just 10 feet long and weighing less than half a ton, it garnered a modest 2017 sales for '39.

To buy one, you visited a local hardware store or appliance shop -- a novel but shortsighted marketing scheme. Crosley Motors built about 5000 cars by 1942, when the government halted civilian production for the duration of World War II.

Styling was little changed and very basic, dominated by low, freestanding fenders and a prominent hood bulged out ahead of small horizontal grilles in the front apron. Headlamps attached to the sides of the hood. Interiors were barren -- just a central speedometer flanked by fuel and water gauges.

Crosley power through 1942 came from an air-cooled, two-main-bearing Waukesha twin producing 131/2 horsepower from 38.9 cubic inches. Performance wasn't quite as bad as those figures imply, since gearing was ultralow. Top speed was about 50 miles an hour, though the factory recommended cruising at no more than 40. Crosley claimed up to 60 miles per gallon, though few owners likely exceeded 50 mpg.

The customary universal joints were eliminated as a further cost-cutting measure, flexible rubber engine mounts supposedly making them unnecessary. But they were necessary, as owners found out. They also discovered that Crosley dealers were far better equipped to fix refrigerators than cars. With this, 1940 volume fell by more than three-fourths despite the expanded lineup.

To fix things up for '41, Crosley called in engineer Paul Klotsch, late of the Briggs Manufacturing Company. Klotsch redesigned the motor mounts, added U-joints to the driveshaft, revised the lubrication system, shortened the stroke, and increased main-bearing surface area -- the last two to improve engine durability.

The revised engine ended up at 35.3 cid and 12 horsepower, but it powered a greatly improved Crosley and sales went up -- to 2289 -- despite higher prices ($339-$496). The cars were now sold through separate automobile dealers in addition to Crosley's appliance outlets. There were no technical changes for '42, but prices rose again (to $468-$582) and the "covered wagon" was dropped. Crosley built 1029 cars that war-shortened model year.

The 1950 Crosley Hotshot was offered in the doorless version above, as well as a model with conventional doors, called the Super Sports.

For a wartime U.S. Navy project, Crosley developed an overhead-cam four-cylinder engine with a block made of brazed copper and sheet steel. Called "CoBra," it was selected to power the first postwar Crosleys.

This five-main-bearing unit had been fairly successful in a variety of wartime machinery from truck refrigerators to Mooney Mite airplanes, but was less than happy in a car. The copper-steel block was subject to electrolysis that developed holes in the cylinder bores, thus necessitating early rebuilds.

Crosley soon rectified the fault by offering a cast-iron version -- called CIBA, for Cast-Iron Block Assembly -- of the same 44-cid size and 26.5 horsepower output. Significantly, used-car price guides of the day gave a higher trade-in value for cars with the cast-iron engine, including retrofitted 1946-48 models.

Production of the '46 Crosleys began in June of that year: initially a four-seat closed sedan, then a convertible, too. A wagon returned for '47, a delivery sedan for '48. All were two-door styles.

Commercial bodies were also offered. Wheelbase was unchanged, but new styling literally made the cars more "grown up": 28 inches longer than prewar Crosleys. Prices were more than double what they'd been in '39, but the Crosley was still quite inexpensive. A '47 was yours for as little as $888.

For a time, things went well. Production totaled almost 5000 for '46, more than 19,000 for '47, and close to 29,000 for '48. Powel Crosley grandly predicted 80,000 a year in the near future, but his firm would never do so well again. New postwar designs from other independents and the Big Three, plus a nagging reputation for engine problems, caused '49 volume to tumble below 7500.

This was ironic, because the '49 was a much better Crosley. New styling made it look something like a scaled-down '49 Ford, with a smooth hood and integral front fenders bearing sealed-beam headlights. Sedans and convertibles also received remote-control door handles and turn indicators -- positively civilized features for a Crosley. In addition, the firm fielded a surprising newcomer: a smart little "bugeye" roadster called Hotshot on an 85-inch wheelbase, priced at just $849.

Seeking to turn things around for 1950, Crosley offered wagon, convertible, and sedan in standard and Super trim, plus the doorless Hotshot and a slightly better-trimmed version called Super Sports, which had conventional doors.

Unfortunately, hasty development caused the Crosley brakes to deteriorate quickly after exposure to road salt and grime, causing tremendous service headaches. Since the firm was still smarting from the woes of its unlamented sheetmetal engine, this new problem was the last thing dealers -- or customers -- needed. Conventional drum brakes were reinstituted for 1951.

Though the little roadsters failed to sell, they were tremendous class competitors in racing. Both could do up to 90 mph, and handling was excellent thanks to a crude but effective semielliptic- and coil-spring front suspension and quarter-elliptic-spring rear suspension. The Hotshot's greatest accomplishment was winning the Index of Performance at Sebring in 1951.

At the other extreme was Crosley's 1950 "FarmORoad," a bare-bones, Jeep-like utility vehicle on a minuscule 63-inch wheelbase. Base price was just $795, and available accessories let it do everything from towing a hay wagon to digging ditches.

But by now, buyers were unmoved by anything Crosley did, so the firm was forced to abandon vehicles in July 1952. It was ultimately acquired by General Tire and Rubber, which disposed of automotive operations after Powel Crosley spent some $3 million trying to save them.