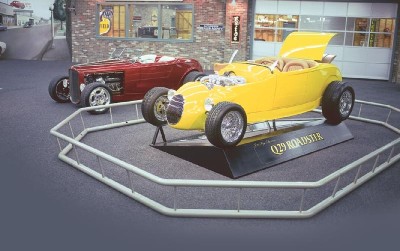 The Q29 Infiniti Flyer is a modern interpretation of the NieKamp '29. See more hot rod pictures.

In the 1990s, several corporate automakers recognized that hot rod-inspired show cars could draw attention to their brands. The phenomenon began with the Boyd Coddington-built/Mitsubishi-backed Aluma Coupe, and spread among a number of automakers.

The car that would become known as the Q29 Infiniti Flyer ­didn't begin as a factory project. Instead, it started when Tustin, California's Joe MacPherson decided he wanted a hot rod roadster. After considering his options, Joe opted to build a tracknose 1929 Ford as a modern interpreta­tion of the NieKamp '29 that won the inaugural Oakland Grand National Roadster Show in 1950.

A successful auto dealer, Joe asked Chevrolet for a four-cam Corvette engine. When he was turned down, his Infiniti representative offered to provide the running gear from a damaged 1992 Q45 sedan. Deter­mined to make history, Joe set out to build the first rod to win the Grand National Roadster Show's America's Most Beautiful Roadster trophy with a Japanese engine.

Joe tapped some of the best names in hot rodding to build the Q29. Art and Mike Chrisman headed up the project, ­fab­ricating the chassis, optimizing the Infiniti 4.5-liter V-8, and chrome-plating virtually every exterior and undercarriage component. The bodywork was done by Steve Davis, upholstery by Tony Nancy, and paint by Junior Conway. The Q29 debuted at the 45th Grand National Roadster show in 1994 and won the AMBR trophy that Joe had so coveted.

Nearly every exterior and undercarriage component of the Q29 Infiniti Flyer was chrome-plated.

A few years later, when Toyota was looking for a vehicle to draw attention to the technology in the new Lexus GS400, a 1932 Ford roadster provided the ideal show car. The idea came about when Keith Crain, publisher of AutoWeek, showed Yale Gieszl, then executive vice president of Toyota Motor Sales, his hot rod collection.

TRD tuned the Lexus 4.0-liter V-8 to 400 horsepower. CSR stretched a set of Just-A-Hobby frame rails to a wheelbase of 112 inches and turned the frame over to RMM, which installed a custom-built IFS and a modified Lexus IRS.

Completed in just 12 weeks, the candy-red hot rod featured a Brookville steel body, Coach leather upholstery, King Bee head­lights, and Budnik aluminum wheels. The finished car was sent on the 1998 new-car show circuit where it got rave ­reviews for its appearance and Lexus received kudos for ­taking on such an enthusiast-driven project.

Plymouth went one step further by introducing the Prowler, a production hot rod for the 1997 model year. Though it never sold in high volume, it was offered through the 2002 model year and it demonstrated a commitment by Chrysler to the enthusiast crowd. No matter how deep their involvement, though, the fact that automakers built and backed these cars during the '90s is a testa­ment to the allure of the hot rod.