Browse the article How Convertibles Work 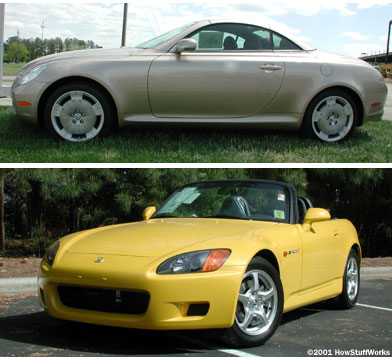 There's something about driving with the wind flowing over you that makes you feel more in touch with the road and landscape. A convertible car captures this open feeling, while maintaining most of the practicality of conventional hard-top cars by using roofs that are easily raised and lowered.

In this article, we'll see how the convertible top works and check out a really neat retractable hardtop. But first, let's take a look at some of the challenges faced by designers of convertible cars.

Thanks to Johnson Lexus of Raleigh, NC, and Autopark Honda of Cary, NC, for their assistance with this article.

Cutting off the Roof

Designing a convertible car is not as simple as just cutting off the roof and installing a folding cloth top. There are other issues to consider.

The roof of a conventional car is essential to the stiffness of the chassis. The roof helps keep the car from twisting and bending. Building a car without a roof is a bit like building a suspension bridge without the cables. As such, the bottom part of the structure of a convertible has to be stiffened considerably. Heavy reinforcing brackets have to be added to the body of the car. This is why convertibles often weigh more than their fixed-roof counterparts.

If you were to cut the roof off of your car, you'd find that the body would twist a lot, especially if you were to do something like, say, drive diagonally over speed bumps. Eventually, the car would develop all sorts of squeaks and rattles and exhibit some poor handling characteristics. It's important for convertibles to have an especially sound structure to make up for the lack of a roof.

Usually, convertibles with their top down are much less aerodynamic than similar cars with permanent roofs. A long, flowing roof smoothes the airflow over the car, resulting in less drag. However, careful attention to detail can result in a convertible that is almost as aerodynamic with the top down as with it up.

One of these details is the small, glass shield located behind the headrests. Have you ever seen people driving a convertible with their hair blowing forward? This happens because the fast-moving air coming off the top of the windshield encounters the slow-moving air inside the cabin. Some of the fast-moving air is decelerated by the slow-moving air. As it slows down, it becomes turbulent, and vortexes form. These vortexes of turbulent air are like little horizontal tornadoes. They spin in such a way as to blow air forward into the cockpit. This can be uncomfortable for the occupants, and can increase the aerodynamic drag. The glass shield behind the headrests blocks this air, making the cabin quieter and more comfortable, as well as improving the aerodynamics.

The Lexus SC430 is almost as aerodynamic with the top down as it is with the top up. We'll take a closer look at this car later. First, let's see how a conventional cloth-top convertible works. 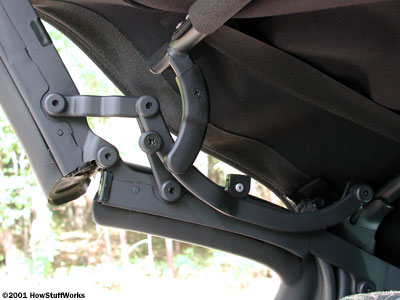 The roof on the Honda S2000 roadster is fairly typical of convertible roofs. It is power operated, but requires the driver to manually latch and unlatch it from the windshield.

One switch on the dashboard operates the roof. To lower the roof, you release the latches and then press and hold the switch in the open position. If the windows are up, they will roll down before the roof starts to move. The roof will then fold itself back into a compartment behind the seats.

A motor that turns a gear on each side of the car powers the mechanism that raises and lowers the roof. The gear engages a bracket that has gear teeth cut into it (much like the mechanism used in power windows). This bracket is connected to the main structure of the roof. As the gear turns, it moves the roof into position.

Once the roof is closed, the clips clamp it securely to the windshield and seal any air gaps.

The roof on the Honda S2000 is soft, and the rear window is made of clear, flexible plastic. On the S2000's roof, the window actually folds to make the roof more compact. Some larger convertibles have glass rear windows that can't fold. On some convertibles, the rear window even has a defroster.

In the next section, we'll take a look at a different kind of convertible roof -- a retractable hardtop.

The Lexus SC430 is a totally different beast. This car is a hardtop convertible. As a hardtop, the car makes no compromises: The ride is quiet and the structure is stiff. With a push of a button it becomes a convertible. You don't even have to undo any latches.

The roof on the SC430 folds in half and stows in the trunk. When you press the button to lower the roof, the windows roll down and the trunk opens. It opens the opposite way, with the front of the trunk (nearest the front of the car) lifting up. After the trunk is open, the roof starts to open, folding in half as it heads for the trunk. The roof folds over until it is fully inside the trunk, at which point the trunk closes. The cool thing about the trunk is that it can still open just like a regular car trunk -- although with the roof down, there isn't much room in there.

Since this roof is fully automatic, there are a whole lot of motors, actuators and sensors required to make it work. The motors that power the roof work in a similar way to those in the Honda S2000. Since the Lexus also has to open the trunk and latch and unlatch the roof, it has a couple of additional motors and actuators to perform those tasks. The folding of the roof is taken care of by a much simpler linkage than in the S2000, though, since the SC430 roof only folds in half.

Having one convertible is (almost) as good as having two cars in your garage. With the top up, a convertible can be as practical as a coupe. But with the touch of a button (and perhaps a few un-latchings), your ride to work can be a whole lot more fun.

For more information on convertibles and related topics, check out the links on the next page.