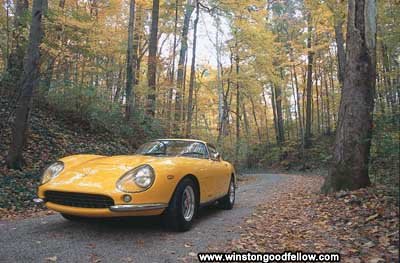 The Ferrari 275 GTB/C was race-ready, but looked much like street version.

That the Ferrari 275 GTB/C was virtually identical in appearance to the highly desirable but not quite as collectible 275 GTB/4 is part of this car's special allure.

This basic Pininfarina shape succeeded the 250 GT SWB as Ferrari's most sporting coupe. There were three basic iterations of the street Ferrari 275 GTB/C, and Ferrari built some 765 examples in all, a high production total for this low-volume automaker. Winning races by the mid 1960s required specialized competition cars, but Ferrari couldn't quite surrender the urge to put its road-going models on the track.

To that end, it prepared a small batch of 275 GTBs, with extra-thin aluminum body panels and plexiglass side windows to shave 500 pounds off the road versions. The 3.3-liter V-12 was left basically stock except for hotter cams and altered carburetion. The first 14 of these tweaked cars were called 275 GTB Competizione, the second 14 the 275 GTB/C. Both were winners on the track, but the GTB/C had slightly more success, including a 1966 GT-class win in the 24 Hours of Le Mans.

As one of the last road-based Ferraris to extended its reach into the highest forms of international racing, the Ferrari 275 GTB/C wins a place among the five most collectible Ferraris.