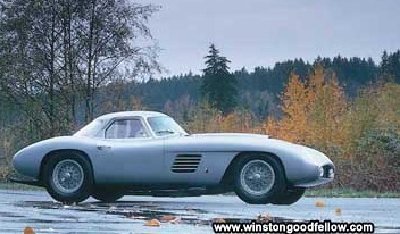 The Ferrari 375 MM had star power. This one was film director Roberto Rosellini's.

Ferrari produced its first car in 1947, and through the company's first decade, its road cars were basically slightly civilized racing cars. Case in point was the Ferrari 375 MM, one of which set a lap record in the 24 Hours of Le Mans of 1953.

It was precisely this sort of pedigree that attracted to Ferrari wealthy enthusiasts - literally emperors and moguls and world celebrities. A handful commissioned top independent car designers, such as Pinin Farina, to clothe Ferrari 375 MMs in custom bodywork and line the interiors with sumptuous leather. Film director Roberto Rosellini, for example, had master coachbuilder Sergio Scaglietti build him one.

What couldn't be domesticated was the Ferrari 375 MM's 4.5-liter V-12, a 340-horsepower jewel that made this 2,400-pound car perhaps the fastest road going automobile of its day.