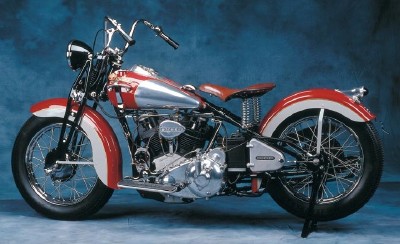 The fastest bikes of its era, is among the dozens of classic motorcycles you can learn about by linking to the articles below.

Link to the articles below for a full-throttle blast through picture-packed profiles of more than 60 classic motorcycles.

Check out pioneers like the 1904 Marsh, emblematic of an era when a motorcycle was little more than an internal combustion engine bolted to a bicycle frame.

Learn about advances that led to boulevard bullies like the 1940 Crocker, which could show its taillight to most anything on wheels -- two or four.

Discover how motorcycles evolved along dual paths in the 1950s and 1960s. One followed the outlaw romance of bikes like the Vincent Black Shadow. The other led innocently to the likes of the 1964 Vespa.

Find out how the speed, reliability, and value of Japanese bikes recast the motorcycle world and loosed on the streets rockets like the 1986 Suzuki GSXR750.

And see what happened when free thinkers saddled up a 502-cubic-inch Chevy V-8 to create the aptly named 1996 Boss Hoss. It's just one of the great bikes among scores of classic motorcycles.