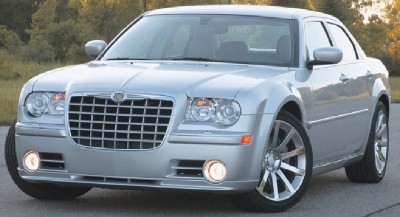 The 2005 Chrysler 300C SRT-8 was built for fun, putting the driver in command of most of its normally automatic features, including anti-skid control.

Even more spectacular was the 300C SRT-8, arriving in early 2005 as the newest factory hot rod from Chrysler's Street and Racing Technology shop. Hunkering a half-inch lower on 20-inch wheels (versus 18s), the SRT-8 packed a much-modified, higher-compression Hemi grown to 6.1 liters (370 cid), 425 horses and 420 pound-feet of twist.

SRT wasn't given to halfway measures, so most all the hardware was beefed-up or redesigned: engine block, engine internals, intake and exhaust systems, transmission, rear-axle gearing (no AWD here), brakes, steering, and suspension. Even the anti-skid control was reprogrammed to be less controlling at the driver's discretion -- and the traction control could now be fully switched off, again to up the fun factor.

Starting at just below $40,000, the 300C SRT-8 was an unbeatable high-performance deal, and testers loudly sang its praises. Road & Track clocked a blazing 4.9 seconds 0-60 mph, pipping Chrysler's claim, and a dragstrip-worthy quarter-mile of 13.3 seconds at 108.2 mph. The car could stop just as well, and though handling was even tauter and more assured, ride comfort was scarcely affected.

There were only two drawbacks, mainly for those prone to guilty consciences: no Multi Displacement System and a $1300 Gas-Guzzler Tax. For everyone else, the SRT-8 was, as R&T concluded, "a car blessed with an American Hemi heart and a European feel and sophistication to its driving dynamics. Think of [it] as an American [Mercedes] E55, for a savings of about $30-grand."

Both models were stretched six inches behind the front doors, creating extensive rear legroom. Modified by Accubuilt, an Ohio-based specialty vehicle manufacturer, the cars could be ordered with personalized features such as rear footrests, lighted rear writing tables, 12-volt power ports for computers or cell phones, and reading lights for rear passengers.

Though our story must end here, the reborn 300s are the kind of Chryslers old Walter P. would endorse: stylish, innovative, solid, and affordable. They suggest a bright future for the marque. Of course, nothing is certain in this world, and complacency is an enemy of success, but we hope the 300s are just the first in a long line of great new Chryslers.

For more on the amazing Chrysler, old and new, see: