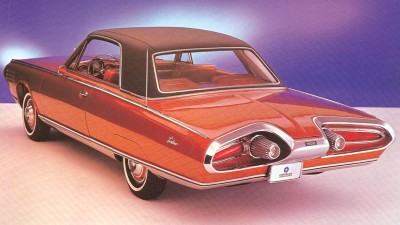 The public heaped praise on the styling on the 1963 Chrysler Turbine Car. All were Turbine Bronze inside and out, and had a black vinyl roof.
©2007 Publications International, Ltd.

Chrysler's headquarters in Highland Park was swamped with more than 30,000 inquiries about its after announcing its Turbine Car evaluation program, which called for each "consumer representative" to use a Turbine Car for about three months.

Ultimately, the field test included residents of all 48 continental states ranging in age from 21 to 70. A total of 203 people drove 50 Turbine Cars between 1963 and early 1966.

The results were in by the following year, when Chrysler issued a report stating that little or no maintenance had been required compared with comparable piston-engine cars.

However, the firm never divulged mileage figures, which were apparently embarrassing. One out of four drivers complained about gas guzzling (they must have been out of peanut oil), and one out of three groused about throttle lag. But there was also plenty of praise, especially about the vibration-free operation and snazzy styling.

Though Chrysler never released one to a journalist, writer John Lawlor managed to drive a Turbine Car toward the end of the consumer test. He, too, was impressed by its smoothness, but annoyed at the relative lack of engine braking -- and at the throttle lag, which he reported as the claimed 1.0-1.5 seconds.

His mileage also disappointed -- just 11.5 mpg -- though he usually ran on cheap kerosene. Lawlor did laud acceleration, which at under 10 seconds to 60 mph was sparkling, especially for a 4,100-pound car. So much for rumors that turbines couldn't be quick.

Yet even as the Turbine Cars were being passed around, Chrysler was moving ahead, testing a fifth-generation engine (A-875) in a 1964 Plymouth. But that would prove short-lived, for a sixth-generation design was ready by 1966.

This 1966 Dodge Coronet 500 hardtop was a testbed for a sixth-generation turbine engine.
©2007 Publications International, Ltd.

Fitted to a Dodge Charger fastback and Coronet 500 hardtop, this offered improved engine braking, plus a novel split accessory drive by which ancillaries like the power steering pump were driven directly from the power turbine; the compressor turbine continued running the fuel pump and other engine-related systems.

Chrysler had actually planned to build 500 turbine-powered Coronets for retail sale, but nixed the idea because of imminent new government emissions standards. Still, that one 1966 hardtop hung around Chrysler Engineering until 1972, when the turbine tale took a somewhat surprising turn.

To find out what happened next, continue to the next page.