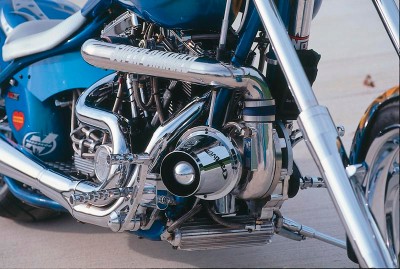 The world of choppers includes many words and terms that are not commonly used, or beg further explanation. Many of the following can be found in the text or specification charts in these chopper profiles, and often come up in any discussion of choppers.

Aftermarket companies: Producers of parts and accessories that are designed to fit on a production vehicle, but the companies don't make the vehicles themselves. In the case of choppers, these parts can include small items, like seats and mirrors, and also large ones, such as engines, transmissions, and even frames. Since many aftermarket chopper companies got their start supplying replacement parts for Harley-Davidson motorcycles, their products often resemble Harley components.

Billet: Solid chunks of metal -- usually a light-weight aluminum alloy -- that are cut and milled to form parts such as brake arms, footpegs, and mirror mounts. The process of forming the billet is expensive, but results in a custom piece that looks far better than a standard component.

Brakes: Old-fashioned drum brakes are rare on choppers. Modern disc brakes have a large rotor that's gripped by a caliper; they work much the same way as hand brakes on a bicycle. Most motorcycles have the brake disc on one side of the rear wheel, the drive pulley (for a belt) or sprocket (for a chain) on the other side. But on some choppers, the rear disc is either part of the pulley or sprocket, or is mounted inboard on the same side of the wheel. This leaves the other side of the wheel "open," providing onlookers a better view of its fancy design.

Diamond-cut: Serrations cut into the edges of the engine's cylinder fins to make them sparkle in the light.

Engines: Most are V-twins patterned after those offered by Harley-Davidson over the years. They are built by aftermarket companies (see entry) such as S&S, Rev Tech, TP Engineering, and Ultima, and are usually larger and much more powerful than Harley's engines, which are still used in many choppers.

Aftermarket engines usually mimic the look of Harley's Evolution (more commonly called "Evo") V-twin built from 1984 to 1999, but others are made to look like the Harley-Davidson "Panhead"of 1948-65, or the "Shovelhead"

of 1966-84. The nicknames Panhead, Shovelhead, and the earlier Knucklehead (1936-47) were all coined by riders -- not Harley-Davidson -- and referred to the look of the engines' valve covers.

Final drive: The belt or chain that transfers power from the transmission to the rear wheel.

Frames: They're offered by numerous companies, but their dimensions are based on a stock Harley-Davidson Softail frame. Oftentimes, the downtube in front of the engine has been lengthened or "stretched," as has the top tube (sometimes called the "backbone") above the engine.

These alterations are often referred to as "up and out." So a frame that is "6 up, 5 out" has been stretched six inches "up" in the downtube, five inches "out" in the top tube. Some people use the term "down and back" (such as "6 down, 5 back") which means the same thing; they're just referring to stretch in the downtube and backbone.

Nitrous oxide: A gas that allows more fuel to be burned in the cylinders, resulting in more power. It is sometimes referred to as "laughing gas," as a purified form can be used as an anesthetic in surgery.

Primary drive: Often a belt, but sometimes a chain, that transfers power from the engine to the transmission. Most production motorcycles use chains, which are hidden behind covers that hold in the necessary lubricant. Most choppers use a three-inch-wide cogged belt, which requires no oil and thus no cover.

Rear suspension: Many choppers are "hardtails," meaning they have no rear suspension. Others have conventional swingarms -- either straight tubes, tubes bent into a design, or tubes that form a triangle -- acting on coil springs that are usually concealed, but sometimes visible.

Stepped seat: Also known as a "King and Queen" seat, it positions the passenger high above the rider, and was a defining element of choppers from the 1960s and 1970s.

Tires: Only the rear tire is mentioned because it's the one that varies the most in width. Most standard Harley-Davidsons come with rear tires that are 130-150 mm wide -- about five to six inches. Some choppers have rear tires that are 300 mm wide, and recently, a company began offering a 360-mm tire.

Transmissions: Those built by aftermarket companies sometimes come with their final-drive sprockets or pulleys on the right side rather than the normal left-side placement. This is usually done in order to accommodate a very wide rear tire. (See Tires.) Most are conventional foot-shift transmissions with a hand-operated clutch, but some -- as noted in the specification chart -- are fitted with hand shifters and foot clutches, which were commonly used on motorcycles prior to the early 1950s.

Triple trees, or trees: Formed pieces that hold the fork legs, connecting them to the handlebars and frame neck. Some are designed to add more rake to the forks than is provided by the frame neck.

Wheels: Range from spoke-type that are relatively common and inexpensive, to one-off designs intricately milled from a solid disk of metal that can cost thousands of dollars apiece. In our specification charts, the latter usually include the supplier's name.