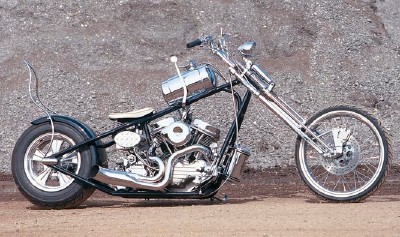 The Bad Moon is a 2003 Radical chopper built by Kenny Rollins and Chopper Shop, Inc.

As the name implies, Radical choppers are over-the-edge creations incorporating lots of custom machine work and lavish paint jobs. Their frames and sheetmetal are rarely straight from a factory or catalog; they're usually modified or handmade and thus unique.

The "manufacturers" can be companies making a few bikes a year for well-heeled buyers, or backyard builders toiling on their own creations. But the bottom line is that the best of these stretch the imagination -- and sometimes, the limits of reason.

The chopper profiles linked below provide descriptions, specifications, and up-close pictures of Radical choppers from around the country.

The Candy Red Suicide Softail features a 145-cubic-inch V-twin engine by Ultima. Have a look at the details here.

Check out the Bad Moon's moon fuel tank, fashioned after hot rod and dragster tanks of the 1950s.

Spoon chopper features a rearview camera and video screen that make this motorcycle a real modern treat. Feast your eyes on the striking details of the Spoon chopper.

The Aggression chopper is one of the Best Radical Custom motorcycles, with a trophy to prove it. Find out how this powerful bike climbed its way to the top.

Low Blow chopper was packed with as much horsepower as possible. Check out the nitrous-oxide injected engine, among other custom features.

The 2004 Revenge is fully-equipped with inverted forks set at a 46-degree rake. Get a closer look at the Revenge's clean lines and Candy Blue paintwork.

Sharp silver blades and dangerous flames pierce the body of this 2005 Rock Hard chopper. Explore the details of this custom motorcycle.

The Tony chopper displays a Candy Red paint job with subtle flame graphics. See for yourself in this detailed profile.

The Deranged chopper is a geometric masterpiece with a diamond-cut engine. See this custom motorcycle from every angle in this article.

John Dodson's first custom chopper was El Balla, which led to the creation of the company Johnny Legend Customs. Get a closer look at the details.

A see-through fuel tank and skull-knobbed hand-shift lever are just a two of the hand-crafted features on the Thugster chopper. Learn about this custom motorcycle.

The Daddy Long Legs chopper was built for a football player who wanted a motorcycle to fit his large physique. Find out how this strong chopper accommodates a big rider.

With original 1932 Harley-Davidson springer forks and a modern primary belt drive, designs of the past and the present come together in the Shovelglide chopper. Get a detailed view.

Take a peek at the details on the Girder Chopper, including a "snaked" exhaust system and stretched girder forks that gives this custom motorcycle its name.

Chopper, Baby custom motorcycle is powered by a 93-cubic-inch engine from Accurate Engineering, adding a vintage touch. Check out pictures.

The Fiend was highly influenced by the owner's preoccupation with pre-1950 artifacts. Learn how this obsession resulted in the Fiend custom chopper.

Sabre Tooth chopper's sheetmetal was hand-formed by the builders for a truly custom finish. View the results of hard labor and intense creativity.

Built by two chopper experts, the Spoon Cobra is a proud display of what combined forces can achieve. See this motorcycle's special features.

The Fendered Spoon chopper has striking Cobalt Blue paint job and a rear tire as wide as it can get. Catch a glimpse of the details.

An armor and woodgrain paint scheme drapes the Street Hustler chopper. Learn how Kaotic Customs stand by their creed that no two bikes should be alike.

This chopper's clean, simple look may not make it as radical as other Scooter Shooters choppers, but it's still a powerful machine with a design all its own. See images.

Discover a chopper with a terrifying design and a name to match. The Executioner comes fully-equipped with a skull head and flamethrower.

Turbo Spike packs a turbocharged sting, with its boosted engine and sharp red-and-yellow scorpion graphics. Notice the details with these colorful photos.

The next section goes into detail on the Pro Street race bikes.