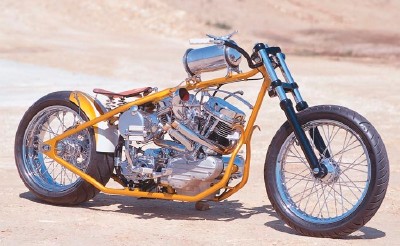 The Hobo is an Old School chopper with Schwinn bicycle handgrips and a jet ski throttle.

Old School choppers are fashioned after Bobbers of the late 1940s and '50s that were often built from stripped military surplus bikes, putting an emphasis on lean and mean. Engines typically are -- or mimic -- older Harley-Davidson V-twins. Hot Rods of the period also lend an influence, so the bikes have a simple, retro look generally devoid of the stretched proportions and forced sheetmetal of many other choppers.

Follow the links below to see detailed photos, specifications, and descriptions of individual Old School choppers.

The Shovel chopper started out as a 1974 Harley-Davidson FXE and took 15 years to reach its final form. Check out photos and features of this custom motorcycle.

The 1947 EL chopper relies on a bare-bones look and hardware with historical significance. Learn why this custom motorcycle is a prime example of the Old School chopper.

Model U: A Chopper Profile

A 1941 Harley-Davidson Model U forms the basis of this flathead chopper by Robert Berry. See how the customization for this powerful motorcycle follows the Bobber theme.

The 2004 Old Skool is a simple chopper with a subtle black paint scheme and very few unnecessary features. Find out what makes this custom motorcycle stand out among the rest.

This chopper is a replica of a 1930s board-track racer. See how this custom motorcycle mimics the appearance of Harley-Davidsons of the late teens to early 1930s.

The Tramp is a 2004 chopper powered by a V-twin built to resemble a classic Harley-Davidson Shovelhead engine. Check out the wild profile of this custom motorcycle.

The Hobo: A Chopper Profile

The Hobo was built with parts taken from many different sources, from Schwinn bicycle handgrips to a jet ski throttle. Explore the unique features of this powerful machine.

The 2003 Oozn Evil chopper was custom-built by Suicycles and is powered by a Harley-Davidson engine. See photos and specifications for this Old School design.

Dirty Love is pure high-performance custom chopper in a plain black wrapper. Learn why this machine is a Suicycles masterpiece.

The features on the Rigid chopper include red-rimmed Black Bike spoke wheels and an 80-cubic-inch Harley-Davidson V-twin engine. Get a close-up look at these details and more.

The Suicide Jockey chopper incorporates a combination of both vintage and modern thought, resulting in an Old School custom motorcycle unlike any other. See photos and specifications for the Suicide Jockey.

The next page takes a closer look at Special Construction custom choppers.