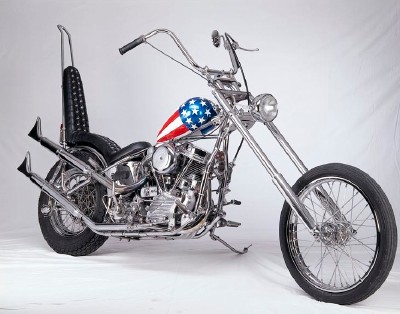 Captain America played a huge role in the film Easy Rider, and today is probably the best-known chopper in the world.

Early choppers first appeared in the 1960s and 1970s. They typically carried long forks, stepped "King and Queen" seats, and wild paint jobs. Most were based on Harley-Davidsons, British twins, or Honda's 750 Four. Later models sported really long forks, along with tall sissy bars and "ape hanger" handlebars. So popular were these choppers that many recent builds mimic their decades-old styling themes.

Follow the links below for detailed photos, specifications, and descriptions of unique Early Choppers.

The Beast is a Honda-powered chopper built in 2003. See close-up photos of the Beast's Classic Invader wheels, four-cylinder engine, and fiery paint job.

This 1958 Harley-Davidson FLH chopper was first customized in 1969 and has been redone five times since then. See how decades of hard labor and creativity paid off through photos of this custom motorcycle.

The Outlaw is a Triumph Bonneville chopper originally built in the 1970s. Explore the details and specifications of this fully restored custom motorcycle.

The Cherry Chopper started out as a 1978 Harley-Davidson FXE. Check out these descriptions and photos of this custom motorcycle, including details of the cherry red paint scheme that gave this chopper its name.

The 1974 Mississippi Queen is an Early Chopper built with mainly Harley-Davidson components. Learn about the features and details of this custom motorcycle.

Captain America, perhaps the best-known chopper in the world, first appeared in the film Easy Rider and is now on display at the National Motorcycle Museum. Find out how this custom bike defines the chopper breed.

The next section outlines custom motorcycles of the Old School class.