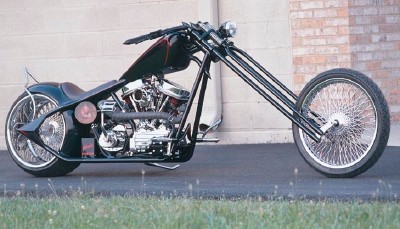 Steve Schaeffer has been building custom choppers for more than a decade, and Chopper, Baby shows off his considerable talents.

A Chicago Chopper Works hardtail frame was chosen to support a set of 18-inch-over Redneck springer forks set at a whopping 52-degree rake, resulting in a striking profile. Black Bike wheels, each densely packed with 120 spokes, add to the radical look. A Performance Machine disc brake up front and a combination disc/sprocket from Exile at the rear provide the stopping power.

Adding a vintage touch is a 93-cubic-inch engine from Accurate Engineering. It's designed to look like a Harley-Davidson 'Panhead' V-twin from the 1950s, but offers modern reliability and considerably more power. To further distinguish his chopper, Steve bent up a set of custom-made pipes for the Panhead that snake out the left side rather than the right. Also unusual is the hand-shift/foot-clutch arrangement to stir the 6-speed transmission.

Though the fuel tank is a catalog item, it has been modified with a spine that runs front-to-back along the top. The seat is frenched into a custom-made rear fender. Other pieces made by Schaeffer include the handlebars, foot controls, and elaborately machined shift lever, all evidence of his undeniable skill.

Chopper, Baby has a striking profile. Go to the next page for more photos and details of what makes this custom motorcycle a radical ride. 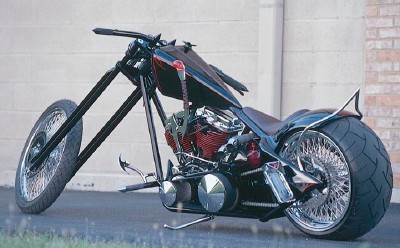 The name of this custom chopper says it all. Chopper, Baby has many modern touches, but its vintage characteristics keeps it a classic chopper at heart.

Built by Accurate Engineering, the engine is fashioned after a Harley-Davidson "Panhead" V-twin of the 1950s, which got the nickname because its valve covers looked like upside-down roasting pans.
Adding to Chopper, Baby's distinctive look is the red edging on its cooling fans, which contrast with the black-painted cylinders.
Chopper, Baby's distinctive molded frame.
A pointed sissy bar makes an impression.
A custom-made shift knob on the Chopper, Baby completes the look of this vintage-inspired bike.