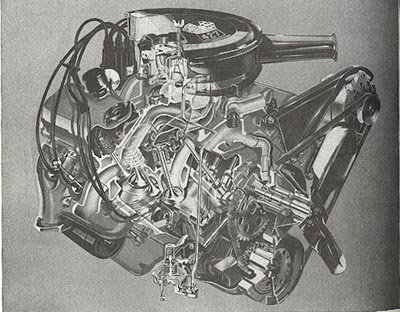 During 1967, Chevrolet brought out its L-88 option for the 427. This included aluminum cylinder heads with enlarged ports, hotter crankshaft, and bigger carburetor. The aluminum heads reduced engine weight from 687 pounds to near the 327's 575 pounds. Equipped with a big four-barrel Holley, solid lifters, and 11.25:1 compression ratio, the L-88 was rated at a mighty 450 bhp. In the Chevelle SS, it could deliver standing-start quarter-mile times of under 15 seconds at terminal velocities of around 100 mph. That was too close to run the Ram-Air 400 GTO for Pontiac's comfort, and its performance fiends soon began stuffing a 455 V-8 into that car. Chevrolet would also go the route of adding extra inches in short order.

Not that the technical brains weren't trying to pump more power out of the smaller engines. As early as 1961, Corvette wizard Zora Arkus-Duntov had tested a 327 with overhead cams and three valves per cylinder. And that wasn't all: there was a 427 V-8 on test in 1967 with one overhead camshaft per bank and electronic fuel injection. Duntov told Hot Rod magazine in 1967: "We've seen well over 600 horsepower out of some of our big-block experimentation."