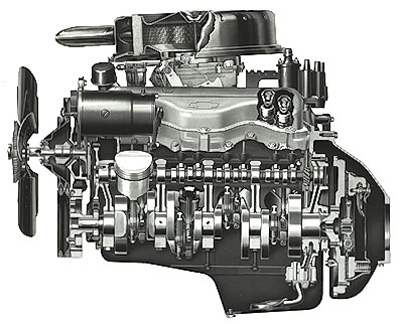 Legendary 409 V-8 was the heart of the Impala SS package.
Publications International, Ltd.

Four-Oh-Nine! from its burbling throb at idle to it high-rpm scream, Chevy's 409 cubic-inch V-8 was a sensation. What was the magic in this new engine? Was it just cubic inches? Well, it was that, plus something else - that indefinable quality an engine has when everything in it is designed to match everything else.

The 409's magical power was evident almost from the day it appeared in 1961. For example, Dan Gurney tore around Riverside in a stock 409 Impala to beat Dave McDonald's lap record, which had been set with the hottest, fuel-injected 283 Corvette. Gurney raced his car in England that same year - but only once. He led the race, outpacing a pack of tuned 3.8-liter (232 cubic-inch) twin-cam Jaguar sedans, until his Chevy lost its wheel. But the 409 has been fast enough to make its mark on the European scene. It went on to a career in NASCAR oval-track events, and was a surprise winner at the 1961 NHRA Winternationals, where Don Nicholson's Impala was timed over the standing-start quarter mile at 13.19 seconds at nearly 110 mph. Thus began what would become a legend in Chevy performance history.

Actually, there had been a big-block V-8 before the 409. It was the type W, the most unlikely starting point for a big-inch powerhouse imaginable. To understand how the 409 came to be, you have to go back to 1958.

Chevy's 283-cid V-8 was hardly a year old when engineers discovered-to their great dismay-that it wouldn't be able to provide competitive performance for the larger, heavier models planned for 1958 and beyond. Chevy was going to need a lot more cubes in a hurry, way beyond the 302 that was the limit for that block and the-current crankshaft. Almost in desperation, they looked to the only bigger V-8 they had, a new 348-cid mill-wincing a little, because it was primarily intended for trucks. But there was nothing else to use as a starting point for a high-performance car engine, so the type W it was.

With its 4.125-inch bore and 3.25-inch stroke in a block having cylinder center-to-center spacing 4.84 inches, the 348 had plenty of room for enlargement. For car applications it was given the name "Turbo-Thrust" to distinguish it from the small-block V-8s, which were named "Turbo-Fire." It was designed by John T. Rausch as project leader, with Howard Kehrl and Donald McPherson working as his principle assistants.

Hotting up the 348 began in mid-1958. There were new and wilder camming, multi-carburetor setups, compression ratios that would have made Kettering proud, and many other little tricks to gain efficiency without losing reliability. This work was handled by Maurice Rosenberger, an ex-Cadillac engine man, assisted by Fred Frincke and Dennis Davis. After developing satisfactory 348s for both racing and street use, this team turned to developing an enlargement, which became the 409.

In concept, the 409 was supposed to be simply a bored-out 348 with a longer stroke. The production unit, however, ended up having few interchangeable parts. Cylinder blocks and heads for both engines were machined on the same lines, though, which was a vital bit of help from the cost angle. In boring out the 348 block, Chevy carefully avoided any changes in the casting. For one thing, it was considered imperative to retain the full-circle water jackets around the bores. This limited the maximum bore increase to 3/16-inch (0.1875-inch), giving a final bore dimension of 4.3125 inches. Stroke was increased from 3.25 to 3.50 inches, which called for a new crankshaft. Both the 348 and 409 had forged-steel crankshafts, though the latter had longer crank throws. Bearing sizes were also shared - 2.50-inch diameter for the mains and 2.20-inch diameter for the crankpins. The 409's crank demanded heavier counterweights, however, and consequently weighed 8.2 pounds more for a total of 67 pounds.

To keep the same deck height, it became necessary to shorten the connecting rods. This had the drawback of increasing maximum rod angularity and therefore side thrust on the piston. While the 348 had permanent-mold cast aluminum pistons, the 409 was fitted with forged-aluminum pistons for greater heat resistance. The 348 employed offset pistons pins, which had the benefit of reducing piston-skirt slap after a cold start. That makes a truck engine more civilized, but has no real importance for a high-performance car. The 409, however, had no piston-pin offset, so there was no need for separate lefts and rights. In the 348, valve relief cavities were on opposite sides of the topland. The 409 pistons had milled valve reliefs, all on the same side.

Like the entire basic layout, the valve gear design for the 348 was taken from the small-block engine. This meant ballstud-mounted, stamped-steel rocker arms and valves arranged in a line at a 12-degree inclination above wedge-shaped combustion chambers. Cylinder heads for both the 348 and 409 were made from the same castings, but the 409 had a wider pushrod holes and different valve-spring abutment faces. It also had stronger valve springs than the 348 for sure closing at high rpm, as well as stronger, thicker pushrods. The 409 used a single coil spring with a flat steel damper per valve, while the 348 had dual valve springs. Both intake and exhaust valves on the 409 were inherited from the 348, the intakes measuring 2.066 inches across the head and the exhausts 1.72 inches.

In 1960 the 348 had been offered with a triple two-barrel carburetor setup that boosted rated power from 340 to 350 bhp. No multi-carburetor manifolds were devised for the initial version of the 409, because its big four-barrel Carter had almost the same airflow volume as three deuces.

The 409 debuted as a mid-1961 option. In its most powerful form it delivered 360 bhp at 5800 rpm, and generated peak torque of 409 pounds-feet at 3600 rpm. It weighed 664 pounds, only 34 pounds more than the 230 cubic-inch Chevrolet six. A 409-bhp option with dual four-barrels by Carter became available for 1962. The following year, a full 425 bhp was claimed for this combination, thanks to an 11.0:1 compression ratio and solid lifters. The same engine with a single four-barrel Carter was rated at 400 bhp. The twin four-barrel option was discontinued at the end of the 1964 model year. For 1965, the hottest 409 was rated at 400 bhp. It sported a big-port aluminum intake manifold, 11.0:1 compression ratio, a high-lift/high-overlap camshaft with solid lifters, single four-barrel carburetor, and special low-resistance exhausts manifolds. A 340-bhp version was carried over unchanged from '64, with 10.0:1 compression, single four-barrel carb, and hydraulic lifters.

How do exhaust headers work to improve engine performance?
How to Do an Engine Oil Analysis
How Opposed Piston Opposed Cylinder (OPOC) Engines Work