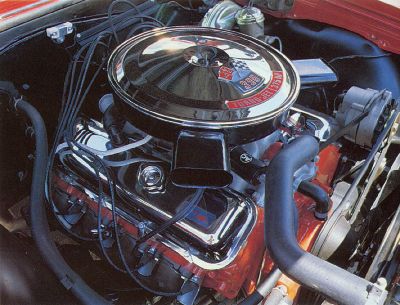 The 396 V-8 was just one member of a whole "Porcupine" family, officially titled Mark IV and marketed as the "Turbo-Jet." There were four in all: two high-performance car engines of 396 and 427-cid, a 366-cid heavy-duty truck unit, and a 427 heavy-duty marine version. The 396 was scheduled to replace the 409 in all its applications, even though that engine was hardly old. Why was it scrapped after barely five years' production? Aside from its basic design limitations, the type W had been tooled for relatively low production volume. To meet future demands, Chevy's Tonawanda, New York, plant (near Niagara) would have to be retooled anyway. Semon E. "Bunkie" Knudsen, then division general manager, decided that only the most modern engine could justify such a major tooling reinvestment, so the "Porcupine" got the nod.

There was no thought of any carryover from the type W or 409 to the Mark IV. An all-new block with 4.84-inch spacing between bore centers was chosen, giving a bore of 4.094 inches. Stroke as 3.76 inches.

The 409 had a deck angled at 33 degrees from horizontal to allow a wedge-shaped combustion chamber to be created with flat-faced heads. By contrast the Mark IV block had the usual deck angle of 45 degrees to the cylinder axis. Main bearings were 2.75 inches in diameter, a quarter-inch larger than the type W. Main-bearing width was also increased, adding two full inches to the cap-clamping surface. The forged-steel crankshaft was cross-drilled to deliver oil to the rod bearings through a full 360 degrees of rotation (a feature the W lacked), and crankpin journals were kept at 2.20-inch diameter.

The 396 was initially offered in two versions, both with four-barrel carburetors, 10.25:1 compression, and hydraulic lifters. One was rated at 325 bhp, the other at 360. Production began at mid-year 1965 at the Tonawanda plant where all Mark IVs were built. There was also a 425-bhp version listed as a Corvette option that year. It had a 11.0:1 compression, impact-extruded alloy pistons with chrome-plated rings, solid lifters, bigger carburetors with twin-snorkel air cleaner, and enlarged oil pan capacity. This engine was in very short supply, but it wasn't short on performance. With it, a car geared for a top speed of 140 mph could blast through the standing-start quarter mile in 14 seconds flat at a terminal speed of 102-104 mph.