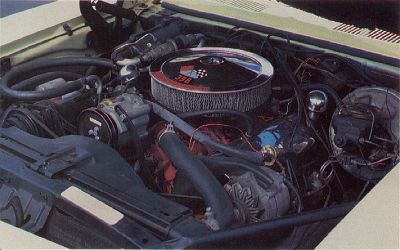 Early in 1963, a mysterious new Chevrolet 427 V-8 appeared at Daytona International Speedway. After being shocked by its acceleration and speed, rivals who were able to look at it with the rocker covers off noticed its odd valve angles, and nicknamed it the "Porcupine" engine. In the 500-mile race, the Chevy simply sped away, leaving all other cars behind, and lapped at average speeds up to 166 mph before dropping out-due to unspecified engine failure. Shortly after that, GM's top management put a ban on racing activities by its car divisions, and no more was heard of the "Porcupine." However, development work on it continued unabated at the GM Technical Center in Warren, Michigan. It resurfaced in the spring of 1965 as a high-performance option for the Chevelle, the full-size Chevrolet, and the Corvette, with capacity to cut 396 cid.

Design and development work on the "Porcupine" is credited to a team consisting of Richard L. Keinath, assistant staff engineer; Herbert G. Sood, project engineer; and William J. Polkinghorne. Keinath had helped Don McPherson design the four-and six-cylinder ChevyII engines in 1960-1961, and had been working on V-8 projects since then. He had joined General Motors in 1950, arriving at Chevrolet in 1956. However, the idea for the "Porcupine" valvetrain and overall engine design came from Robert P. Benzinger, who had laid out and detailed the all-aluminum Corvair flat six, and was gaining recognition among Chevrolet's technical staff as Division's top engine man.

What was new and unusual about the valve gear was that it resulted from working "backwards." Normally, an engine designer starts with the combustion chambers, and arranges the valves so they can be operated by simple, straightforward mechanisms. Benzinger felt that better results could be obtained by giving attention to breathing rather than just locating mechanical parts. Accordingly, he started with the ports and manifolds, giving the ideal dimensions and gas flow paths, and left the valves till later. Valves are happy enough working at almost any angle, but what about the pushrods? They can't be bent, but must go straight from the lifter to the rocker arm. With very few compromises, Benzinger poked the pushrods through little openings to the oddest places-and the whole thing worked superbly well.

Intake valves were set at an angle of 26 degrees to the cylinder axis, and exhaust valves were tilted 17 degrees from the same axis. That wasn't all, for both intake and exhaust valve stems were also tilted in side view, one forwards and the other backwards, by 9 degrees. This lined them up with the pushrods to avoid setting up any rotation in the rocker arms. This basic cylinder-head configuration was then tested, fiddled with, honed, and polished until it provided optimal breathing. That part of the design was then frozen, and all other components were designed around it.