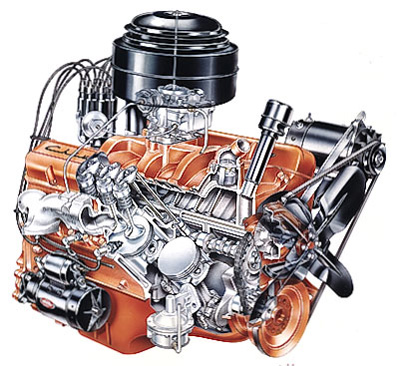 Considered a benchmark engine design even in its day, Chevy's lightweight and efficient 265 V-8 has been a performance favorite for two generations.
Publications International, Ltd.

Shortly after Ed Cole took over as Chevrolet chief engineer, GM board chairman Alfred P. Sloan asked him about his plans for the department. Although they included tripling the engineering staff, Sloan just waved him on. Quipped then-GM president Charles Wilson to Cole, "I'll bet that's the first time you ever had your plans approved without submitting them."

To alter Chevrolet's time-honored image from builder of mundane people-movers to performance-car specialist, Cole knew he would need a V-8 engine. His predecessor, Ed Kelley, had toyed with the V-6 and a 231 cubic-inch V-8, both of which Cole rejected. But, he didn't have much time to consider alternatives. When all the development phases were accounted for, there would be just 15 weeks in which to design a new powerplant for the 1955 model line. With the help of Kelley and motor engineer Harry Barr, Cole made it.

"I had worked on V-8 engines all my professional life," Cole said later. "I had lived and breathed engines. Barr and I were always saying how we would do it if we ever design a new engine. You just know you want five main bearings - there's no decision to make. We knew that a certain bore/stroke relationship was the most the most compact. We knew we'd like a displacement of 265 cubic inches and the automatically established the bore and stroke. And we never changed any of this. We released our engine for tooling direct from the drawing boards - that's how crazy and confident we were."

Of course, even a ground-up engine has to be designed within certain parameters. Since it was intended for Chevrolet, the new V-8 had to be relatively inexpensive to build and efficient in operation. It need not be a poor engine - and it was anything but - yet it had to be a model of simplicity and production economics, which it was.