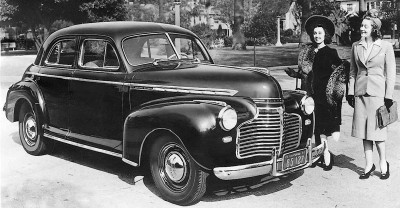 Renewed competitiveness was evident in an expanded 1940 line with what Chevy called "Royal Clipper" styling. Though not a drastic change from 1939, this facelift was sufficiently thorough to make the cars look much newer. Wheelbase was 113 inches, up from 1937-39's 112.3. Master 85 returned from '39 as the cheaper Chevy, with Master DeLuxe above it.

Each offered business coupe, two-door town sedan, and four-door sport sedan; the 85 also listed a woody wagon, the DeLuxe line a sport coupe. A new top-line Special DeLuxe series had all these plus Chevy's first true convertible coupe, which was quite successful (nearly 12,000 model-year sales).

The gap widened to more than 300,000 for 1941 as Chevrolet scored its first million-car model year. Though no one knew it then, this year's substantial redesign would carry the make through 1948: 116-inch wheelbase, Knee-Action linewide, attractive new styling by Harley Earl's Art & Colour Section, and five extra horsepower achieved with higher compression (6.5:1); new pistons; and revised combustion chambers, valves, rocker arms, and water pump. Master 85s were dropped, but Special DeLuxe added a sleek Fleetline four-door sedan at midyear.

Distinguished by a more-formal roofline with closed-in rear quarters a la the Cadillac Sixty Special, the newcomer managed a creditable 34,000 sales for its shortened debut model year.

Styling refinements marked the war-shortened '42s. Fenders were extended back into the front doors, as on costlier GM makes, and a smart, clean grille replaced the somewhat busy '41 face.

Models stayed the same except for five-passenger coupes replacing business coupes, and series names continued as Master DeLuxe and Special DeLuxe. The latter now contained a Fleetline subseries with a new "torpedo-style" two-door Aerosedan that proved an instant hit and a conventional Sportmaster four-door, both bearing triple chrome bands on front and rear fenders.

By the time the government halted civilian car production in February 1942, Chevy's model-year total was over a quarter-million units, of which less than 50,000 were built in calendar '42. Convertibles and wagons numbered only about 1000 each. Like all 1942 Detroit cars, rarity has since rendered these Chevys coveted collector's items.

For more on Chevrolet cars, old and new, see: